The characters are dragged across a dry sea bed to the crumbling ruins of an ancient city where nearly a thousand green men, women, and children have made their home. Here we learn about the culture of the Tharks. They live 1000 years, this long life has contributed to the shortage of resources. They are warlike and savage. Families are forbidden, there is only the community. It is survival and rule of the strongest. The ruins are the remains of an ancient human-sized city, clearly not made by the 15' tall green men.

The characters should learn martian here fairly quickly. I'm not a huge fan of various languages as a game mechanic, it can be made to work in certain circumstances but mostly gets in the way of fun in my experience. The solution in the movie was drinking martian milk that makes you comprehend. Then there is the whole telepathy thing which I don't think adds much.

Things that happen in the City Ruins:
Put into prison
A calot is put on guard duty, if treated kindly it will take to one of the characters and become a loyal pet
If a character kills a Thark the others will applaud and laugh and be impressed.
Learn green martian culture and religion 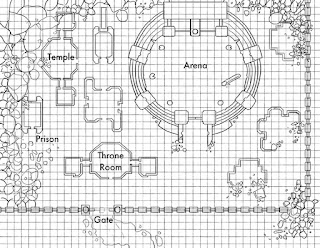