MENTALIST
Mentalists are individuals with unnaturally prodigious mental abilities. As Mentalists gain experience, they hone their prowess and add more options to their suite of powers. Mentalists may use any weapon, though they typically scorn much besides an ornamental dagger or pistol, and wear only the lightest armor, such as basic harness. 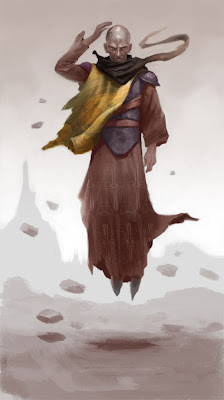 Warriors of the Red Planet update

It has been a long time! I must admit the John Carter movie took the wind out of me, I wanted it to be SO good, but it was only 'just ok'. Worse yet for Burroughs fans it totally failed on the character of John Carter himself. The noble gentleman of the South willing to dive into adventure and danger for his beautiful princess was reduced to a gold-grubbing reluctant hero.

The movie wasn't a total bust, but it failed on enough levels that fans and the uninitiated alike were turned off. Bad move Disney & Andrew Stanton!

However, we drive on undaunted to achieve our goal of making the best Sword & Planet RPG every devised by man! The eminently talented Al of Beyond the Black Gate has delivered a document of unparalleled brilliance, passion, and knowledge of this most venerable of science fantasy genres - and I have taken the responsibility of illustrating it with illustrations worthy of its subject matter! So, where have I been?

This has been an eventful summer. I've taken the duty of art direction for not just one, but two of Kabam's hit titles: first The Godfather and then Edgeworld. The work of an art director is more than you would think. While the conductor doesn't play First Chair Flute, he must understand every instrument and it's place in the orchestra to make beautiful music. I hope that these games are well art directed.

I have endeavored to make great art for Warriors of the Red Planet, this does not come without the burden of time well spent working on the illustrations. You will have to be the judge of the quality.

I present to you a couple of the fantastic creatures from WotRP. More sneak peeks are forthcoming. Enjoy! 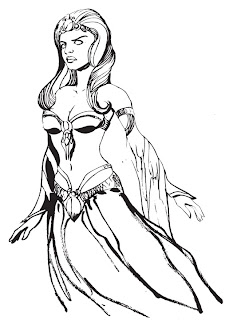 Anthipode
AC: 2[18]
HD: 3
Atk: 1d6 needles
Dmg: 1d4 per needle
Save: F3
Move: 120’
When not cloaked in its illusions, the Anthipode is an unsettling humanoid creature with writhing tentacles for arms and a smooth, featureless face with a single hole in the center of unknown purpose. Typically though, the Anthipode wraps itself in illusions, appearing to be a beautiful courtesan, savvy merchant, or whatever else would further its latest con game or provide its next fresh meal. When unmasked (typically by a physical assault), the Anthipode defends itself by shooting needle-sharp projectiles from its tentacles. 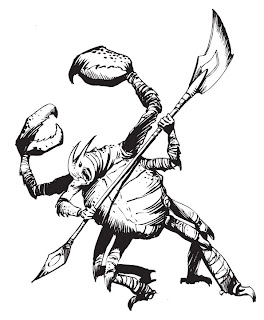 Arodel
AC: 7[13]
HD: 2
Atk: pike
Dmg: 1d8
Save: F2
Move: 90’
The Arodel are a race of crablike humanoids, typically living in tribal groups in the most desolate wastelands, though there are rumored to be a few actual cities inhabited by the creatures. They sometimes trade with civilized lands, though they often have somewhat unique interpretations of standard business deals that occasionally result in the consumption of those they trade with. Arodels favor the use of a motley array of pikes and other polearms.

These are just the black & white drawings. I plan to have all the illustrations in color and provide a low cost b&w as well as a premium color edition of WotRP if all goes well.

Not very related to old school games, but a fun game to play between old school gaming! This is my recent published game, a deceptively simple card game where the objective is to spell Murder - doing so tells a story of murder. But the cards have effects that can thwart your efforts or turn the tide of the game. Should be available at your local game store soon. 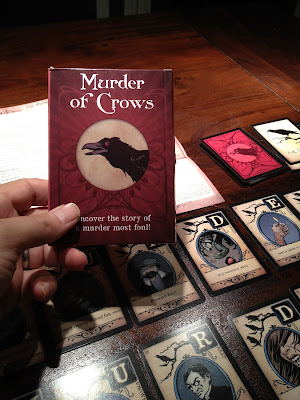