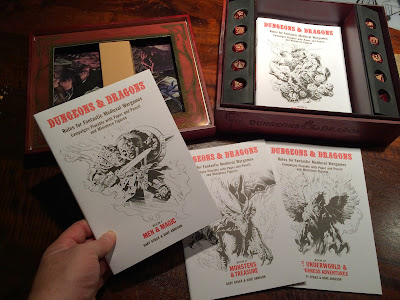 When the Original Edition premium reprint was first announced I was quite excited. Then I'd literally forgotten about it until wandering through my local game store and seeing it sitting on the shelf, one lonely copy left. The game store owner told me they'd only received 3 copies and that was all they could get. I'm glad that Wizards chose to make this available in game stores first before releasing it to larger chains and Amazon. This shows some commitment to the local communities that keep tabletop games alive. Albeit on life support.

There are some very interesting and surprising qualities to this reprint. It is really more than a reprint, remastered might be a better term as we'll see. The box is composed of high quality lacquered wood, inside are a full set of dice, the original 3 booklets, all 4 expansions, summary sheets, and some nice art prints. It is a nearly complete facsimile of original edition. All fairly densely packed with only a little air space. It comes across as a nice high quality collector's edition.

First thing I noticed when opening the box is how crisp the printing is. I got out my old original edition set for side by side comparison. Not only is the printing sharper, but the books are about a half inch wider and the same height. 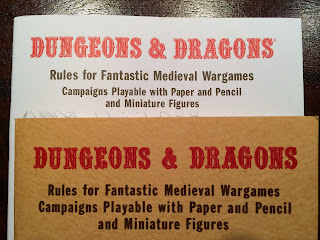 You can see on the cover headers that Wizards used the exact same fonts, next to the original they make the old ones look blurry. I have copies of that font it is called Quentin Caps, and no available version of that font is that sharp, which means they digitally refined it. There are also some minor format changes like emphasis on Rules for Fantastic Medieval Wargames, and then the rest in a smaller font below. The insides have even more delightful subtle improvements. 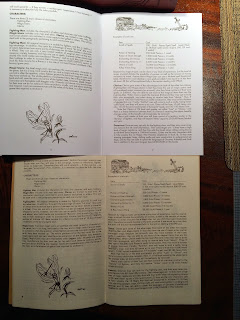 You can tell they have retyped all the text and layed them out using modern technology for a crystal clear reproduction. Even the art looks cleaner. This is appearing to be a real labor of love beyond what has been done with the previous 1st and 2nd edition reprints. Looking more carefully you can see the line breaks are a little different, and also some word changes. For example referring to these booklets as "books" instead of "volumes". So they did more than just copy the text, some editing has been done. I haven't thoroughly read through them and compared yet, but if my initial cursory inspection revealed changes I suspect there will be more. 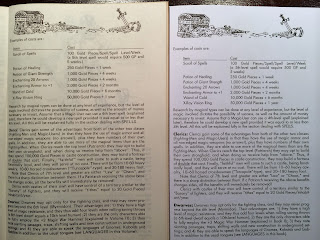 The paper is thicker so you cannot see through the printing on the reverse side. With the pages being a little wider the document has a bit more room to breathe, so it feels more comfortable.

Any criticisms I have are minor, and really more of a personal thing. For example it seems strange not to include Chainmail. I can see why Swords & Spells wasn't included, but that really was the mass combat system for the original edition so having it would have made the set more complete. The covers are a brilliant white, too contrasty to me. I'd like to have seen the covers be on off-white or cream paper. This also made me long for Wizards to go a step further and produce a hard bound single-volume, edited, version with redundancies removed, and making it complete by including all the official material from Strategic Review.

So what other piece of nostalgia can Wizards dredge up for us? I think the obvious answer is the D&D Rules Cyclopedia.