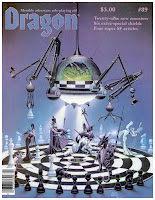 35 years ago in the September 1984 issue of Dragon Magazine #89 appeared an article describing the Sentinel character class. Back then Dragon regularly published non-player character classes; unofficial characters classes meant only as NPCs. Of course most of us tried these out as player characters and often found them either way over, or under powered, but that didn't matter. Was the class cool or not was all that did.

The Sentinel wasn't exciting by any means. No unusual powers or spells. No weird or exotic flavor. Just a straight forward guard who took his duty seriously. And I always liked them! Maybe because Judas Priest had a cool song called The Sentinel released that same year on their seminal Defenders of the Faith album.

I've done a few revisions and updates to the class over the years, including one I blogged long ago when I first dived into the OSR. Now with the Sentinel's 35 year anniversary here is a new O5R version, optimized to fit on a bookmark similar to the Bookmark Dungeons I've been drawing lately. 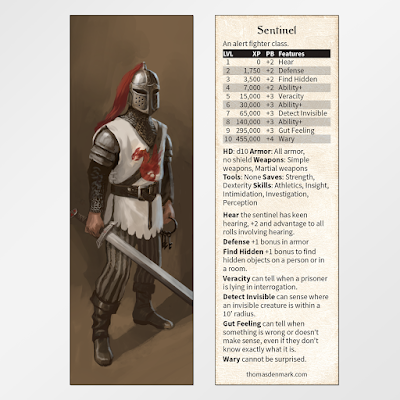 Here is the text if you want to copy and paste and fiddle with it to your own taste.

The Sentinel
An alert fighter class.

Features
Hear the sentinel has keen hearing, +2 and advantage to all rolls involving hearing.
Defense +1 bonus in armor
Find Hidden +1 bonus to find hidden objects on a person or in a room.
Veracity can tell when a prisoner is lying in interrogation.
Detect Invisible can sense where an invisible creature is within a 10’ radius.
Gut Feeling can tell when something is wrong or doesn’t make sense, even if they don’t know exactly what it is.
Wary cannot be surprised.

If the class feels underpowered you could change Veracity to Extra Attack, like a regular fighter has. And/or give it access to Martial Archetype features, but then it is just changing into a regular fighter.

If you're curious about the art, I stumbled across an old sketch of a knight I did many years ago, and recently did a repaint on it for fun. 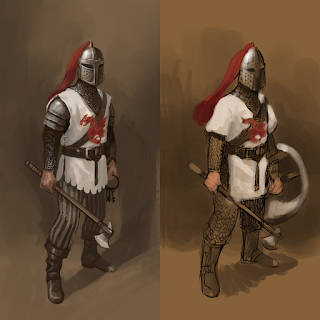 As a side note, the cover of Dragon #89 was one of Den Beauvais' epic Fantasy Chess covers. Here is as high resolution image of it as you'll find anywhere. The original sold a while back for nearly $4000. 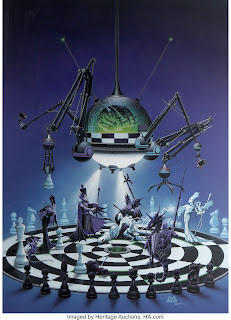 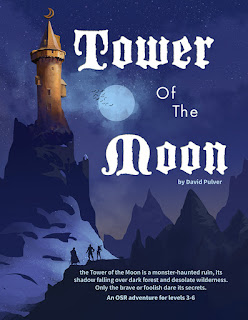 The Tower of the Moon is a monster-haunted ruin, its shadow falling over dark forest and desolate wilderness. Only the brave or foolish dare its secrets. A classic style adventure of Gothic Horror for three to five 3rd-6th level adventurers.

Those familiar with the Original Edition line of RPGs I've been developing over the years will recognize David Pulver's work. He is a well known long time writer in the RPG business, most of his work was for Steve Jackson games on their GURPS line. We've been talking for a while about publishing a line of books from his own personal writings and gaming.

This first one is a test to see if Pay What You Want would be the best pricing for an OSR adventure.

As you can imagine writing for RPGs is demanding work with minimal compensation, and I thought it a good idea to create some products that could provide some royalties for him later in life. He get's royalties from each purchase, your generosity is appreciated. If this does well we'll try to publish more of his books.

Check it out here: https://www.drivethrurpg.com/product/289553/Tower-of-the-Moon 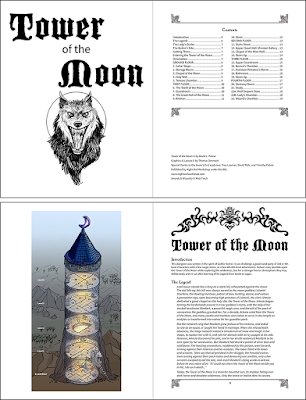 I've seen some recent discussions of people talking about their first RPG's, and it got me to thinking about it. These are the first 10 RPG's I ever owned.
Keep on the Borderlands 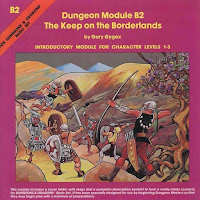 While not a stand alone RPG it was the very first RPG product I ever owned and it had those invaluable combat matrix and equipment tables which allowed me and a friend to fumble through playing the game. This adventure is a classic, and considered the best adventure module ever written for beginning play. 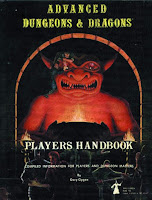 The first AD&D books I got were: Player's Handbook, DM's Guide, Deities & Demigods, and Fiend Folio for Christmas in 1982. I didn't get the original Monster Manual until a year later. So the FF was my monster manual, which might explain a lot of my weird tastes. Despite its warts AD&D 1st Edition has a particularly great flavor. Reading the DM's Guide is still entertaining and informative, almost a train of thought straight out of Gary Gygax's imagination and extensive knowledge of the fantasy and historical genres. I make it a point every few years to read the DMG from cover to cover. I mentioned the Moldvay Red Box in the list, and it's a bit fuzzy as to timing when I got the Red Box set, so I lumped them together. 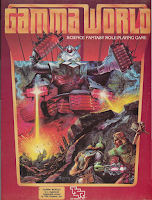 I own just about every edition of Gamma World, actually, I think I have them all including the awful White Wolf version. I recall some kids on the bus in middle school having a copy of 1st edition, but I didn't get a chance to look at it then. I got Gamma World 2nd edition right when it came out, and in hindsight I consider it the best version. They took some of the best things about AD&D and applied it to the post-apocalyptic genre. And your characters started out super powerful, it's almost a super hero game. Each edition does have its own charm, though I'm hard pressed to find anything I like in the White Wolf edition. The last version has a card based mechanic I liked in theory, but in practice had some clunkiness. One thing Gamma World shows is that if TSR had any sense or awareness of the market they should have turned the AD&D system into a universal roleplaying game before GURPS took that title. 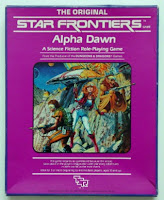 It says a lot that this game still has a small but loyal fan base. You can find resources still being created, blogs, and discussion groups. I recall liking Star Frontiers when it came out, but being disappointed that it didn't have spaceship combat so was glad when Knight Hawks came out. (A mistake I oddly repeated with my own Colonial Troopers RPG, and fixed with the starship supplement, though that is another story I'll tell at a later time)

In hindsight Star Frontiers was just too safe and mundane of a setting. It was very generic sci-fi. If it'd taken a more kitchen sink approach like D&D did, throwing in every cool idea from every science fiction novel from HG Wells to Frank Herbert, Larry Niven, Philip K. Dick, Heinlein, and so on then Star Frontiers could have been a really compelling setting. I do like the cover art by Elmore, I might like his Sci-Fi work better than his fantasy. 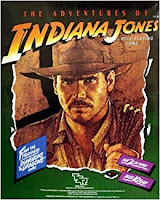 The Indiana Jones RPG gets a lot of flack for being the worst RPG ever, and probably deserves that moniker if you only consider the boxed set. I've written before my fondness for this much maligned set. Once you add the Judges Survival Pack it's a pretty nifty game that captures the spirit of the genre. The production values and art were very high quality for its day, and the adventures are quite well written and playable. Someday I'll finish my in depth review of the system itself. 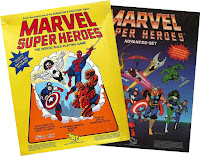 I don't care what anyone says, Marvel Super Heroes is the best superhero roleplaying game. Yes, I've played Champions and appreciate that system, but measured for shear fun playing super powered characters the FASERIP system is the best. If you were familiar with the comics you could instantly stat out any character. The addition of the advanced set was remarkably well done, they could have gone crazy with complexity (yes Champions, I'm looking at you) but instead Jeff Grub maintained the integrity and simplicity of the system. 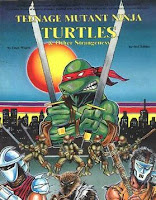 Teenage Mutant Ninja Turtles was one of my favorites, and the first non-TSR RPG I owned. I still get a warm fuzzy feeling when I think about it, even though the Palladium system isn't the greatest. All the supplements for this game are just great. I was looking into getting the GM's screen, since it's the only item of this game I don't own but yikes are the prices high on it! 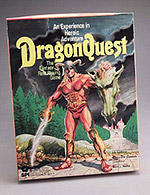 DragonQuest was feared by TSR as a potential DnD killer. Looking back their fears were a little silly, Dragonquest is ok but was never a threat to DnD's throne. They bought the game, published like one book or something, then left it to quietly wilt away unsupported. I should do a review of this game, it has some things that were innovative in its day, but are dated now and represent a different direction from where the RPG industry went. 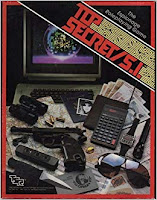 Not much to say about this. I got this on a whim at the game store, read the books, but never got anyone to play it. Sometime later I did play the James Bond RPG, and that game is so good it's hard to imagine playing spies with anything else. 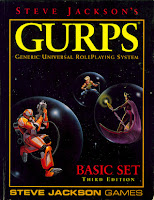 After high school I played way too much GURPS while in the Army. It was during the 2nd edition era of AD&D and I didn't care for what TSR did to the game. GURPS had a fully skill based system, crunchy combat, and no classes or levels. Everything I thought was wrong with D&D at the time, funny that now I think the opposite.

Looking back at 2nd edition DnD it's not all that bad, just some aesthetic decisions that were a turn off. It didn't go far enough in redesigning and improving the game. The cover art wasn't as cool as it could have been. 3rd edition is really what 2nd edition should have been, well except the covers I'm not much of a fan of the non-illustrated covers.

During the 90's I didn't play or buy that much RPG stuff. Then 3rd edition DnD came along, rekindled my interest in gaming and I went a little crazy buying and playing all the games I missed like Champions, Call of Cthulhu, Pendragon, Deadlands, and many others.