Dungeons and Dragons the most important gaming franchise in the world

Forbes has written an article about the upcoming book Dungeons & Dragons Art and Arcana: A Visual History an illustrated guide to the history and evolution of the beloved game, told through more than 700 pieces of artwork from each edition of the core books, supplements, and modules; decades of Dragon and Dungeon magazines; classic advertisements and merchandise; and never-before-seen sketches, large-format canvases, rare photographs, one-of-a-kind drafts, and more from the now-famous designers and artists associated with the game. The book's authors had unparalleled access to the archives of publisher Wizards of the Coast, as well as the personal collections of top collectors and the game's original designers, allowing them to compile the most comprehensive collection of D&D imagery ever assembled.

There are some real gems from the archives. 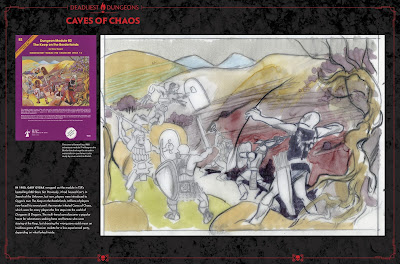 You can read the full article here: https://www.forbes.com/sites/davidewalt/2018/05/10/these-exclusive-images-reveal-the-art-and-arcana-of-dungeons-dragons/#6560c2da5810
No comments:

Some time ago I cut my copy of Chainmail apart, typed up all the text, and reformatted it into a more legible book.

One of the stand out elements of the book is how much Landsknechte are mentioned with their stats and abilities scattered all over the book. I took all the mentions and combined them into one super entry to see it all together. With how much reverence and attention is paid to these famous troops you'd think they were the greatest fighting force since the Great Heathen Army invaded the British Isles. 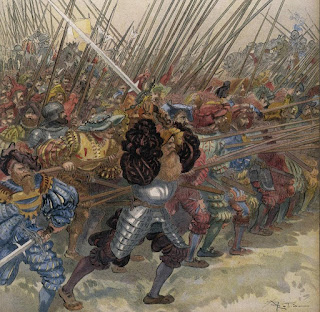 Only half penalties for facing.

Form Hedgehog: If ten or more of these troops are in a square-type formation, pikes or pole arms facing outwards in all four directions, a “hedgehog” has been constituted. A hedgehog can be moved at one-half speed. It may never charge. A Hedgehog will never be drawn into neighboring melees. It may be attacked only by troops armed with like weapons (pikes or pole weapons).

Close Formation: Landsknechte attacking in close formation (5x2 figures minimum) fight as Armored Foot, with extra die for weapons. For every two men so attacking an additional “mass shock” die is added. When defending in close order (1” or less apart), with pole arms facing the enemy, they are treated as Heavy Foot. If attacked in flank or rear, or when in open order, they are treated as Light Foot.

Pike Charge: Because of the reputation and ferocity of these troops, an enemy charged by Landsknechte pikemen (other than like troops) must roll two dice and consult the Loss table, just as if they had suffered excess casualties. However, if the unit being attacked fails to score high enough it is not removed from play; rather, it retreats 1 1/2 moves, backs to the enemy, and must rally. If they are followed up by pikemen before they rally, the unit is totally eliminated. Note: The charging pike formation must be eligible to receive “max shock” dice (at least 10 figures in 5 x 2 formation) in order to force enemy units to check morale. 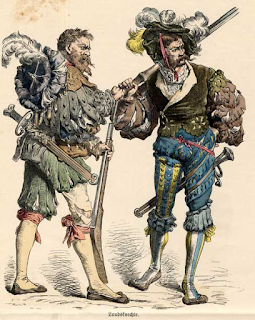