This one is the most reminiscent of the original Alien. I'd love to play an RPG set in this universe.

This has been around for a while, but I was just reminded what a great collection of links to free RPG's this is on 1KM1KT. Everything from Dungeon Squad to FUDGE, and a personal favorite Sorcerer. 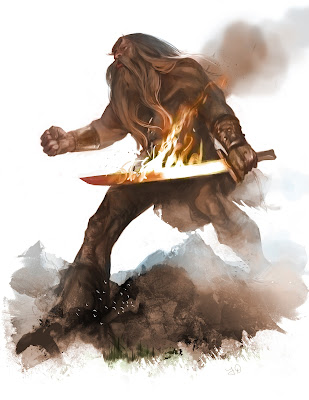 Surtr art by Thomas Denmark for Legend of Badass by Ben Thompson
The original Gods, Dem-Gods & Heroes book is disappointing by almost every measure (except that it sneaks in several unlicensed intellectual properties such as Conan and Elric). And the AD&D version of Deities & Demigods is little better than a high level Monster Manual. On a side note I do like the revised name Legends & Lore quite a bit because it is evocative and far more generalized.

The first version of Surtr appears in Gods, Demi-Gods & Heroes

Surtur:
Armor Class: 2
Magical Spell Ability: lst-4th Level
Move: 12"
Fighter Ability: 18th Level
Hit Points: 250
Surtur is King of the Fire Giants. As is Hyrm, he is gifted with protection from weapons up to +4 in hitting ability. Holy Swords are the only exception to the rule and they will score double
damage upon Surtur while Swords of Cold will inflict triple the damage done. Cold has the same effect on Surtur as fire has upon Hyrm. Surtur is armed with a normal iron sword of flame (a Flaming Sword) which burns continuously. Anyone struck by this blade will take 2-20 points of normal damage and 2-8 dice of fire damage. Frost giants are automatically slain if this blade hits them, and other creatures of Coldness, of the snows, etc., will flee in terror before this blade. Surtur is served by 3-18 Red Dragons and he may call upon six Class 6 fire demons a year to do his will.

Surtur (lord of the fire giants)
Lesser God
Armor Class: -2
Move: 15"
Hit Points: 380
no. Of Attacks: 2
Damage/Attack: 6-60
Special Attacks: See below
Special Defenses: immune to fire, 1-3 or better weapon to hit
Magic Resistance: 60%
Size: 1 (20')
Alignment: Lawful Evil
Worshiper's Align: Lawful Evil (fire giants)
Symbol: Flaming Sword
Plane: Gladsheim (Jotunheim)
Cleric/Druid: 15th level cleric
Fighter: 20th level fighter
Magic-User/Illusionist: 5th level magic-user
Thief/Assassin: Nil
Monk/Bard: Nil
Psionic Ability: Nil
S: 25 (+7, +14) I: 19 W: 14 D: 12 C: 25 CH: 20
Most fire giants regard Sutur as their leader and their deity. Deep in Jotunheim, Sutur waits for the day when he can lead the fire giants to the great battle of Ragnorok.
Surtur looks like an immense fire giant, with the crackling flames for hair and eyebrows. He wears heavy iron armor which is hot to the touch (1-10 points of damage to any who contact it with exposed flesh), and wields a 15-foot flaming iron sword. He strikes with this twice per round, inflicting 6-60 points of damage on a hit. Surtur is immune to fire attacks of any kind.

Quite a power leap from the humble original edition version! Still, this is a god that a well equipped high level party of intrepid adventurers could hope to take out in a fair fight. And I'm sure many did back in the day.

Last week I decided that I would leave my contract position with Wizards of the Coast. I am no longer working on Dungeons & Dragons, although I may provide occasional consultation in the future. My decision is one based on differences of opinion with the company.

Too bad. Monte Cook is definitely one of the shining stars for me in contemporary game design, I really enjoyed his Ptolus and Arcana Unearthed books tremendously and was looking forward to seeing what he would do with D&D5.