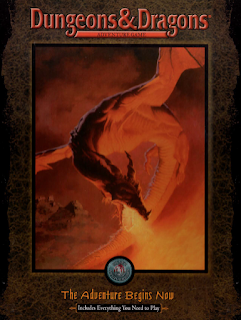 One of the last iterations of the basic D&D game before TSR was purchased by Wizards who abolished the basic line for a unified 3rd edition, the Dungeons & Dragons Adventure Game has just been made available on DriveThruRPG at no cost.

It has two books; a fairly minimal Rules Book, that packs quite a bit in it for the size. And an Adventure Book with 3 decent adventures.

Character progressions are described for 1st-5th levels. It has 7 character classes with 8 pregenerated characters:

The monsters section is an eclectic collection that is almost as random as those from the Holmes' Basic. Including a level 9 Dragon!

For adventures it has a much cleaned up Random Dungeon Generator reminiscent of the tables from the DMG. The three adventures are:

It also has a DM's screen and a large fold out area map of the town of Haven.

I missed out on this set when it came out and it is one of the few Basic sets I didn't already own, so it's a pleasant surprise to be able to pick the PDF up for free. I may even run the adventures in my home game.

How does it rate? Well at a price of $0 it is a must buy, worth downloading it just for the adventures. Other than that it doesn't come close to comparing to the Moldvay red box. Though I think it may be an improvement over some of the later basic sets. Not a terribly bad sendoff for the basic line.

Update: it's been pointed out to me that this is more of an introductory set for 2e Advanced Dungeons & Dragons than it is a Basic set. Having read through it I agree that there are some 2e like elements such as THAC0.

Maps of Barsoom are always fascinating. Given the way the original books were written ERB didn't adhere strictly to an accurate map and instead chose to go wherever the narrative took the story. This resulted in locations and distances that don't match up when plotted out on a map.

To further complicate matters, no accurate map of the actual geography of Mars could even begin to be constructed until 1971 with Mariner 9, and it took decades to map out the planet in any detail. So combining this knowledge a lot of interpretation has to be made.

Since working on Warriors of the Red Planet and attempting to make sense of all of this in order to make a useful and semi-accurate map I've become a bit of a connoisseur of Barsoom maps, gathering from wherever I can find them. So I was pleasantly surprised to find this map of Barsoom from Punch Magazine 1956. In many ways it is the best way to tackle the subject as it is very illustrative and conceptual without trying to be too precise in any way. And it has a great aesthetic. 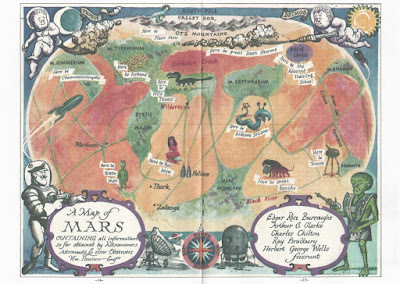 A few years back I participated in an art challenge called creatuanary where you post a drawing of a creature each day of the month of January. Out of that came the popular Norse Beastiary that sold out of 2 print runs in just a few months. (thank you to everyone who got a copy!)

I've been meaning to participate again but last January got away from me. This year though I've put together a great list of Cryptids that I want to draw, so I'll be posting them on my social media.

Some of them could be fun creatures for your OSR game, so here is the Ahool with stats. 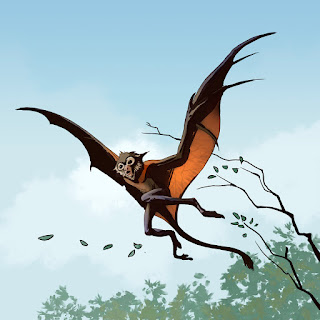 The Ahool (or Athol as it is called by some) is a flying primate with bat-like wings. Their name comes from its loud distinct cry; "AHOOooooOL!".

Ahool live in the deep jungles, and can be found across tropical and sub-tropical climates. They have a distinct face that has features of both a spider monkey and a bat's, with large dark eyes, red-orange skinned wings, large claws on its forearms, and covered in grey fur. They have a wingspan of 18 to 28 feet (6 to 9 meters). They mainly eat local fauna; such as large fish, they will occasionally attack humans. Most likely because they're extremely territorial and opportunist and will attack larger prey under the right circumstances.

In combat they will start with their blood curdling shriek. Then they can pick up a medium sized or smaller creature, lift it up to 100' in the air and drop it. As a last resort they will engage in melee attempting to claw and subdue potential prey.