Happy Halloween. Welcome to this special horror themed post. A special gory feast for your eyes today are the drawings of Robert Bloch's HP Lovecraftian horrors. They are every bit as disturbing as the madness inducing stories of eldritch horrors and things that should not be. 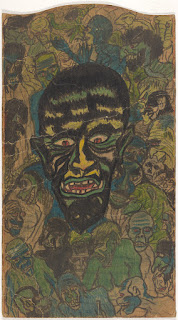 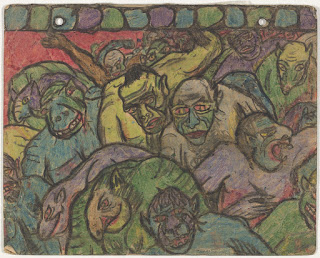 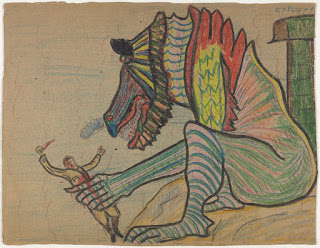 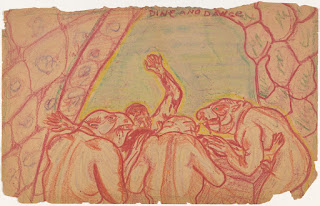 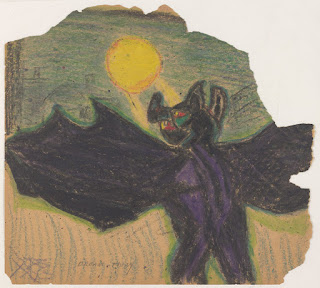 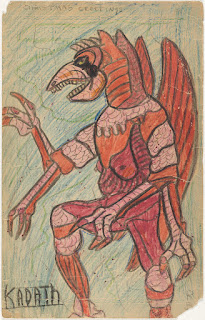 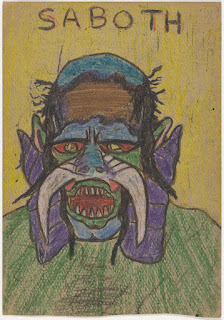 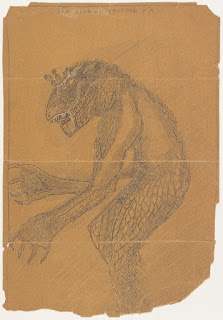 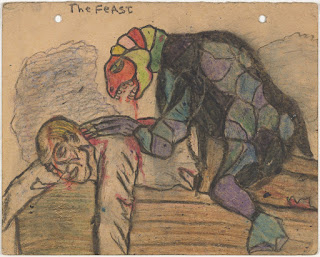 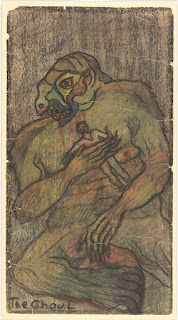 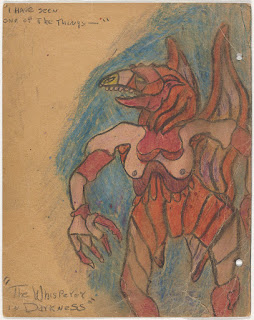 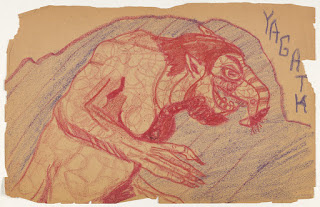 I just received the edited 1st draft back of On The Arizona Hills from my editor the brilliant and under-appreciated David Pulver and boy did he take me to the woodshed. I have to roll my sleeves up and get to work on the 2nd draft of this adventure.

I know, I know I'm spending a tremendous amount of time and effort on what amounts to just the first 2 chapters of the novel, but if I get this part right the rest of the adventure will work. I do have the rest of the entire adventure outlined and researched, it is only a matter of details at this point so the remaining parts should come together much faster (and I don't have to write a whole new RPG!).

One of the things that was clearly missing was the "strange science" part. I mean it had some cool gadgets, similar to the gadgets from Warriors of the Red Planet, but the rest of it felt like a plain old western. While that was part of the point: contrast with the weirdness of Barsoom, it didn't stand out on its own from any other western RPG. So I dug into the novel again and there is an important detail: James K. Powell, John Carter's mining partner, is a Mining Engineer by training. That opened up the door to the most obvious missing class: Engineer! So now the adventuring party can have an expert at all things mechanical in order to decipher the use of any strange science items from Barsoom (or any of the other worlds in the Burroughs-verse). It is a kind of parallel class to the Scientist in Warriors of the Red Planet.

Here is the first draft (much of it borrowed directly from WotRP).

Engineers in the 1800’s were knowledgeable in the cutting edge technology of their day. They understood the principles of mechanical engineering, mathematics, electricity, and the aether theorem. Much of what they knew was superseded by new discoveries, but in their day they were the experts. Many of them used their knowledge to become prospectors, railroad engineers, and the like in the Wild Western frontier. These weren’t frail men in lab coats, they were serious hardened individuals used to difficult labor. 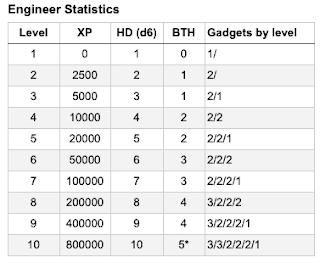 Gadgets: Each Engineer possesses a suite of instruments, devices, and weapons, collectively known as Gadgets. The Engineer adds a new device to this suite each time he or she gains a level. An Engineer with an Intelligence of 13 or higher starts out with one additional Gadget. An Engineer with high Intelligence may apply his or her Basic Ability Modifier to a Gadget that requires an attack or damage roll.

Gadgets require power to operate. Unless otherwise noted in the Gadget’s description, each Gadget may be used once per day, and must be recharged before it will function again. Each Engineer possesses a portable power source (pack, battery, etc) that will recharge any Gadget the Engineer possesses, once every 24 hours. Engineer gadgets at 4th level can hold 2 charges, at 8th level they can hold 3 charges.

A Engineer may use another Engineer’s Gadgets for a cost of two power pack charges, providing they are able to figure out how to use it (50% chance, modified by Intelligence: Basic Ability Modifier x 5%).

Recharge: Some items (see STRANGE SCIENCE) require recharging to function. Engineers are capable of recharging one such item per day, at a materials cost of $100 per charge.

The early history of Dungeons and Dragons is every bit as fascinating as any story could be about young creatives with a great idea and finding success. Jon Peterson, author of the excellent Playing at the World, has written another book about a part of D&D's history we don't know as much about: the insider business.

This is a part of the history of TSR and D&D I've long wanted to learn more about, and it appears Jon Peterson has done the deep research to uncover what happened behind the scenes.

Pre-orders are available on Amazon and Barnes & Nobles. 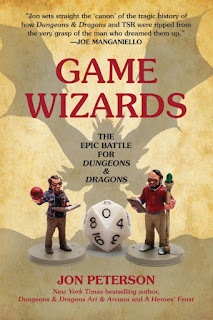 You can read more at his blog. https://playingattheworld.blogspot.com/2021/09/game-wizards-my-new-book.html 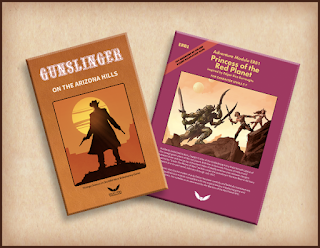 The prequel to Princess of the Red Planet is almost complete. The first draft has been sent off to be edited by my esteemed colleague David Pulver.

I've set up a preview page on the Night Owl website. Just a few images for now, but it will get fleshed out as the time for the Kickstarter gets closer.

Having read through the Mars series by Edgar Rice Burroughs several times I think what stands out about the first novel and helps to really make it special, besides it being a great rip-roaring story, is the way it starts out as a traditional Western. The mundaneness of the Old West sets the stage and contrasts with all the fascinating weirdness of Barsoom. And I really wanted to capture that contrast. Thus Gunslinger is a traditional Western RPG, with a little bit of strangeness (the strange science part) until the characters find themselves somehow on the Red Planet. You can follow the book exactly or let the players discover and explore things and create their own story that gets them there where they can meet the strange denizens of the Red Planet.

Why Kickstarter? I've resisted crowdfunding and have instead just made my fun little books as Print-on-Demand available at a reasonable price for everyone. Well, if a Kickstarter is successful then the quality of the printed books can be much higher than POD. Also it helps to increase awareness which means more players which means more support the games can get. This book has been a considerable investment in time, research, writing, play testing, editing, and of course art. I want to make it as good as I can. A Kickstarter will allow this.

Stay tuned as more details are revealed and the time for the Kickstarter is revealed.

Here is an index of OSR blogs. It isn't 100% complete (could any index be?), but it is filled with great treasures to explore.