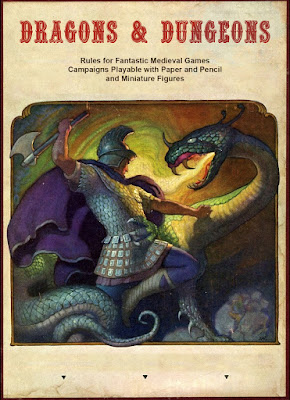 What if NC Wyeth had illustrated the original classic fantasy role playing game?

If there is an illustrator who has influenced modern fantasy art more than Frank Frazetta it is NC Wyeth. His ability to convey the key moment in a scene was rivaled only by his ability to capture the personality of the characters involved. He had no fear of leaving the brush mark exactly how it came off his brush - wasting no time blending or "noodling" the paint. Frazetta has often mentioned how much he was inspired by NC Wyeth, and it certainly shows in many of his luscious oil paintings.

I didn't discover NC Wyeth's work until I started art college back in 1991. The school had posters of his work on the walls, and I couldn't believe how good they were. I didn't even know it was possible to make paint on canvas look so amazing. In someways I felt robbed that I hadn't seen his work before, it certainly would have influenced my artistic development during my high school years if I had.

This picture, taken from the classic Legends of Charlemagne book, while not necessarily his best, was the most "D&D" feeling illustration of his I found. It is fun to speculate how different the game would have felt if he had illustrated it.

(I inverted the title of the classic fantasy roleplaying game in order to avoid any...imperial entanglements, no challenge to anyone's copyright is intended, this is merely a parody)