I've started a new forum to discuss old-school gaming in general, and various projects I'm involved with in particular.

I intend to be pretty active on it and hope to get you all involved in discussing all kinds of cool stuff!
1 comment:

"About 30 years ago, my dad had his first edition D&D books hand-bound into a single leather tome... it's something of a family heirloom."

This is an inspiring idea, I don't want to cut up my personal copies, but it makes me want to find some old bashed up versions of the core AD&D rulebooks and bind them up in a leather tome like this! Can you imagine hundreds of years from now and some archaeologist digs this up and tries to decipher it...

The Hobbit. A review.

You've had 75 years to read the novel, so I don't feel so bad mentioning spoilers.

In summary I loved Peter Jackson's The Hobbit: An Unexpected Journey and would highly recommend it to anyone even mildy interested in fantasy, adventure, loyalty, and friendship.
The movie is not perfect, and I can't think of one that is, but in the history of cinema I would put The Hobbit: an Unexpected Journey in the top 15%.

Compared to Peter Jackson's interpretations of Lord of the Rings, The Hobbit is certainly lighter in tone. If you've read the book then you'll understand why, it is a children's book. However Jackson did everything he could to add action, danger, darkness, and an adult perspective to the story by pulling elements in from Tolkien's notes, and the appendices from LotR. This movie is not a kid's movie. Depending on your point of view this is generally a good thing, since we live in such cynical and not-so-innocent times. Yet the movie manages to capture some of the naivety of the period that Tolkien penned the tale of one of the most famous novels of our time.

The movie opens to a segue to The Lord of the Rings with Frodo and his uncle Bilbo as Bilbo decides to pen the tales of his adventures. A masterful job is done of making Martin Freeman and Ian Holmes the same person through a beautiful pen & ink sketch and with subtle transitions.

Just like LotR an epic sequence of exposition sets the stage as we learn the history of Ereborn (the last kingdom of the dwarves) and Smaug the terrible. This is done at least as masterfully as it was done in LotR (I'd argue better as the effects and storytelling were better) - but exposition tires quickly, and this sequence is cut mercifully short with us getting the gist of the situation and ready for the story.

Much has been said about how long it takes for the dwarves to have their party at Bilbo's lovely 'hole in the ground' and the actual adventure to begin, but I loved every moment of it. Nearly each dwarf is given a moment to shine and introduce his character, all the time the character of Bilbo is enhanced and developed as he can't bear the idea of an adventure (after all, adventures are terrible things that "make one late for dinner."). The compelling story of the dwarves, and the epic song "Misty Mountains" would make anyone want to join in their ill-advised and impossible adventure to reclaim Ereborn from the dragon Smaug the magnificent - the "greatest calamity of our time". The only thing I could see changing is moving the "blunt the knives and crack the plates" scene to an extended edition.

After an epic song, made mostly of Tolkien's epic lyrics, Bilbo faces a decision whether to join the adventure. He says no, but after a night's sleep he wakes up to an empty home and realizes that he might miss a once in a lifetime adventure and runs after Thorin Oakenshield and company to join their epic quest. After a few gags, some successful, some not, the story moves on.

From here a few exciting moments happen, including a great scene where Thorin Oakenshield acquires his surname - and an epic enemy is described, and a truly memorable scene with three trolls happens. A patrol of orcs is hunting the party and from that point on the story seriously kicks into high gear. The party eventually ends up in Rivendell, where the White Council convenes (one of the few slow, but necessary moments). We get a preview of the dynamics of LotR, and then the story moves on to the Misty Mountains and the Goblin caves.

It is at this moment that I realized I was seriously into this movie. The Storm Giants were true to the book, but not strictly necessary, but they did help bridge the gap from Rivendell and the goblin caves. Once the party ends up in the Goblin caves is when the movie gets into high gear.

The scene with Bilbo and Gollum, Riddles in the Dark, is one of the greatest moments in cinematic history, perfectly filmed. Meanwhile the dwarves and Gandalf mow down ridiculous amounts of goblins and eventually exit the Misty Mountains, only to get "out of the frying pan into the fire" - just as in the book.

In this epic scene, the climax of the movie, Bilbo proves himself and Thorin learns just what stuff Bilbo is made of. The end of the film provides a satisfying conclusion, while promising great things for the next 2 movies.

A few follow up notes:
The look of the dwarves: while some of them are quite ridiculous, after watching the movie again I appreciate the variety, else it would be nearly impossible to tell the difference between them all.

The additions might seam superfluous, upon a second viewing each is important. Even Radagast sets up important scenes that prove critical. And if you are a true Tolkienfile you can appreciate how Jackson and co. delved into the lore to flesh out the story.
1 comment:

Thoughts on D&D Next

I admire what Wizards of the Coast is trying to do with D&D next. I think the core idea of unifying all the editions, and making a system that accommodates the many factions that have developed amongst D&D players over the years is a noble, if impossible, idea.

I was discouraged when Monte Cook left, it was a bad omen, because he was one of the best designers and writers in their talent pool. But I tend to be optimistic at heart and hope they pull it off. Wizard's recent interest in re-publishing the great products of TSR's past is an encouraging sign.

I wonder what Wizards could do to win back fans old & new alike. I have some ideas...

For the old fans I'd like to see Wizards do a serious reorganized reprint of Original D&D. Take all the books published before the Monster Manual, professionally edit and organize them into a Cyclopedia, and illustrate them in a manner that respects the aesthetic of that era and is still professional. With a nod to great classic artists and illustrators, but without the ridiculous conventions of today with its spiky armor, over sized weapons, cartoonish muscles, and garish colors. I want something a little more believable, something like this: 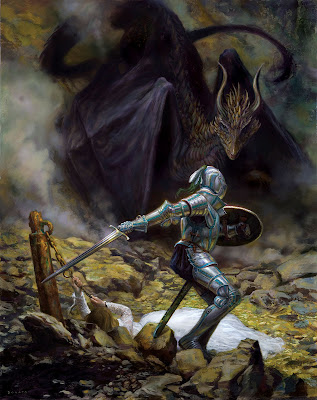 For the new fans I'd like to see the best of 4th, 3rd, and 2nd edition. Wizards lost me with 4th, but from what I understand it was the game balance and customizable abilities that players liked. It is not too hard to imagine how these things could be added to original D&D without killing the spirit of the original game. If they made this system modular, and these things were optional, it might work.

I've been following D&D next, downloading and reading each version. Play-testing on occasion and remain cautiously hopeful. If you are curious check out the links on RPGGeek here.
1 comment: