Announcing Raiders of the Lost Artifacts

Eagle eyed observer Art Braune noticed a little book called Raiders of the Lost Artifacts on my display at Gen Con. I had made a few playtest copies for my local game group to test out the rules. I had a few copies left over and sold them at Gen Con in order to judge reactions. Well, they were the first to get sold!
The genre of pulp fiction is an underserved field in roleplaying games in my opinion. There are no shortage of fantasy and science fiction games. But that exciting period of the early 20th century doesn't have a lot of representation. There has been a few pulpy games, a search through RPGGeek.com doesn't reveal a whole lot. I'm probably missing something.

There was a game in the mid-80's called the Adventures of Indiana Jones which has unfortunately been maligned as "the worst RPG of all time", I actually like that game quite a bit and have been working on an extensive write up and review about why it deserves more recognition, that I'll publish someday. There was also a d6 System version of the same IP sometime later that I have never played. This brings me to Raiders of the Lost Artifacts, or Raiders! for short. This is a game I have long wanted to make. Mixing adventure, mythology, pulp action, and of course archeology into a compelling roleplaying game experience.

The game is nearly completed. Sections of the character creation are being rewritten that didn't quite come out right. We tried to experiment with skills, but it lost that classic "original edition" feel. Anytime you replace player ingenuity and detective work with a skill roll the game just becomes like d20, or any other roleplaying game for that matter. So we are collapsing skills into the core class abilities to enhance the game and player utility. Once that is done all that will be left is to fill the spaces in the layout with art!

Over the next few weeks I'll be previewing the book, and if all goes well have it out soon! In the meantime, here are some drawings of the character classes:

A very nice write up of Guardians on The Old Dragoon blog popped up in my email today.

Check out the full review at:
http://theolddragoon.blogspot.ca/2016/08/gaurdians-best-little-supers-rpg-i.html

Gen Con has quintupled in size since I was last here. It's pretty amazing to see all the creativity in all the many many new games here. 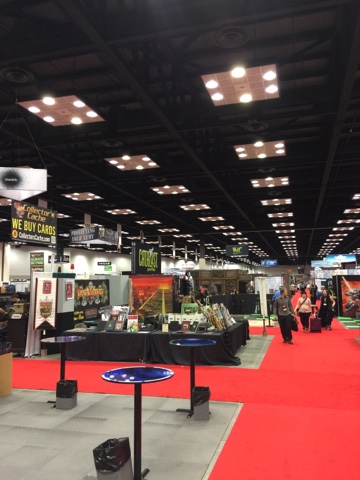 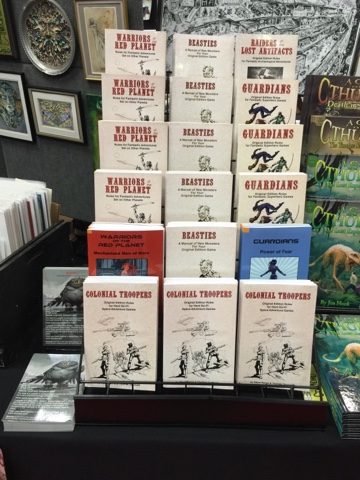 I made some postcards to hand out with a free monster on the back. I'm sharing space with Goodman Games at space 413. There is a big Dungeon Crawl Classics banner overhead. Hope to see some readers of this blog. 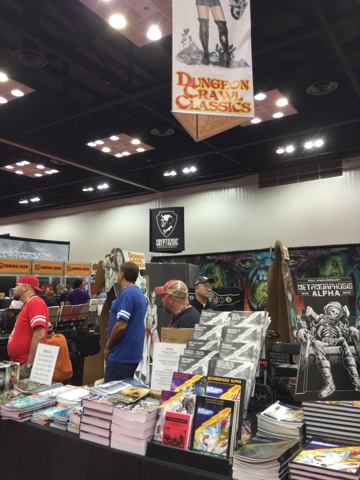 John Carter versus the White Apes

This is a composition I've been messing with for a while. I had a color version that has been posted here before. This one I've changed some poses and added some interesting martian ruins in the background.

Usually I make Dejah Thoris a brunette, but this princess is blonde. Maybe it's her cousin. 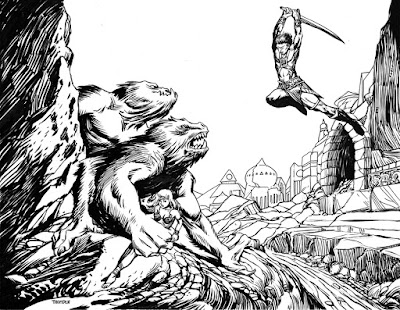 I will be spending time at the Goodman Games booth, and will have some of my recent Original Edition game books for sale. Even if you've got them, or aren't interested in purchasing any you can swing by say hi and get a free postcard with a monster on it...the dreaded Yarglith.

It has been several years since I've made the trek to gaming mecca, so I'm really looking forward to it. Hope to see you there.

How metal is your vocabulary?

Without a doubt two of the greatest flavors of the '70's and '80's is Dungeons & Dragons and Heavy Metal.
I would blast Metallica and Black Sabbath while drawing D&D characters for my high school gaming group. The imagery of metal is essential dark fantasy and naturally inspires characters, creatures, and adventures for any great D&D campaign.
A data scientist recently scraped data from over 200,000 metal songs to compile the most metal top 20 list of words. How was this data compiled?

To get the lyrics, I scraped www.darklyrics.com. While darklyrics doesn't have a robots.txt file, I tried to be gentle with my requests. After cleaning the data up, identifying the languages and splitting albums into songs, we are left with a dataset containing lyrics to 222,623 songs from 7,364 bands spread over 22,314 albums.

These words are a handy reference if you wanted to spice up the taunts of a Heavy Metal Lich "I'm gonna tear the veins from your body as you scream and pray to the gods!" or if you wanted to come up with the most metal name ever for an adventure module "Reign of the Flame Demon's Sword of Sorrow".

There was also a list of the least-metal words, but I didn't want to taint this totally metal post with those words, so you'll have to follow the link to see them.

Once again, master sleuth and D&D historian Jon Peterson digs up long lost treasures. This time in the form of a previously unreleased AD&D pilot radio show. The show is engaging and well produced. I found myself wanting to hear more!