PotRP Design Diary #35 - What Class Should be Added?

The Gunslinger Kickstarter funded in under 24 hours! The first stretch goal was unlocked: an additional character class chosen by the backers. Results are in:

Poll results:
Arizona Ranger 57%
Huckster 21%
Gambler 14%
Pinkerton 8%
Arizona Ranger it is!
Here is the rough version of the class with placeholder art: 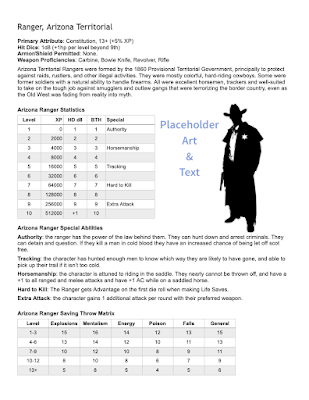 On the Arizona Hills adventure live on Kickstarter

It has been a much longer road than expected to get here. The kickstarter is live now.

Hopefully the campaign is not confusing. On the Arizona Hills is a prelude to A Princess of the Red Planet adventure, much like the Village of Hommlet is a prelude to Temple of Elemental Evil. It includes adventure locales from the first two chapters of the classic novel that inspired it.

The purpose of the adventure is to get the characters from Earth to the Red Planet.

I recently stumbled across this image via https://yodanno.wordpress.com/ . Apparently it is a concept image for the Moldvay Expert set cover. It was drawn by Jim Roslof. There are things about the composition that are striking, I think it would have actually made for a great sequel to the Holmes set. 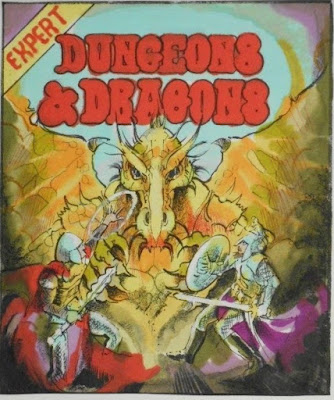 I got some suggestions to try making dungeon geomorphs in the bookmark format. I've tried various version of this, I'm not sure how well it works. The utility of geomorphs is how you can rotate them any way and they connect any orientation. This limits that utility.

You could print these out on your home printer and it could work to some degree, but if these were to be printed at a commercial bookmark printer the tolerance on the edges wouldn't allow for the tight margins necessary to connect them. There would be a .25" margin or more between the sides. These are Ok for reference I suppose. 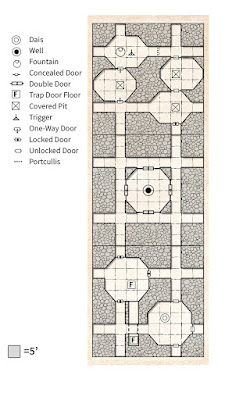 This uses the standard geomorph format we are all used to: 10 squares and 2 connections to each side. There could be more opportunity to play around with designs, perhaps if I make any more of these I'll experiment more within that interior space.

Repulsive Reliquary of Pekwyn and the Elemental Warlock

Pekwyn was a petty noble who feigned compassion for the royal family and worked his way into the interior court of her majesty the empress of Baelphor, his twisted desire for knowledge and unlikely greed helped him to rise quickly in the ranks of court advisors.
In secret his true loyalty was to the Elemental warlock lords of chaos with whom he shared ancestry. He held pride for his lineage and deep-seated resentment for how they had been banished from the realms. When he died in bizarre circumstances involving a herd of swine and a barn fire other servants of the Elemental  Warlock Lords interred his body in a reliquary with the bodies of other great elemental warlocks of the past. His body served as a phylactery for one of the Elemental Warlocks to return.
A brazier filled with incense protected by a demonic machine fills the reliquary with dream inducing smoke that will affect the heroes ability to fight and cast spells. The heroes must foil the schemes of the warlock before he brings the rest of his coven back.
The heroes must activate the powers of an ornate amulet that can be found on Pekywn's remains in order to stop the other warlocks from returning. A rune-covered skull and a silver longsword are among the treasures to be found. It's been a while since I've posted a mystery map, but I've been developing a new technique to produce better maps.

While I enjoy drawing maps they can be time consuming, and between making illustrations and writing, my time to create maps is limited. With this method I can produce seemingly contradictory goals: quality and quickness. Along with the method for drawing city maps for the Princess of the Red Planet adventure posted previously, and with this technique hopefully I can get all the maps made I need for future projects.

Who knows, I might even start back up on my Bookmark Dungeons. 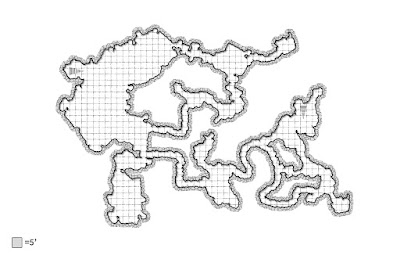