Experimenting and working on improving my map drawing skills. Here with the fantasy world of Nevah I created some geography brushes to paint the contours of the continent and islands. Made some terrain brushes of mountains, hills, and trees. And a pattern fill for the water. Generated some random names using Donjon then colored and tidied things up a bit.

It took a few hours, and it didn't come out too terrible for one evening's work. With some refinement and practice this could be turned into a viable process to generate fantasy maps. Not quite publishable I'd consider this a sketch or rough to then take to a finished polished state. 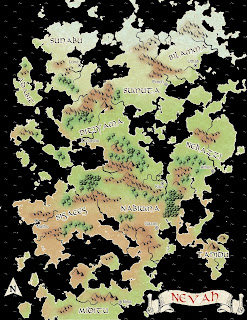 These are the brushes I made in Photoshop to "paint" the terrain with:

I recently completed a sketchbook and videoed a tour through it with some commentary. Mostly Norse mythology stuff in there, with a little bit of gaming and some other randomness. As much as I draw I don't actually finish sketchbooks all that often. Most drawings are done on loose leaf paper here at Studio Denmark.

In 1914 Edgar Rice Burroughs’ seminal classic A Princess of Mars launched the “Sword & Planet” genre and directly inspired Flash Gordon, Superman, Dune, Star Wars and many other characters and stories. Largely forgotten by the public to the point that the John Carter movie was accused of ripping off the very films the original book had inspired!

The Mars novels by Edgar Rice Burroughs were a major influence on the early D&D game. The original LBBs contain more references to Barsoom novels than to any other fantasy literature.

Some of the races and creatures even appear in the Wandering Monsters tables of OD&D.

Gary Gygax acknowledges this influence in the Forward to Men & Magic “These rules are strictly fantasy. Those wargamers who lack imagination, those who don’t care for Burroughs’ Martian adventures where John Carter is groping through black pits...will not be likely to find D&D to their taste”

Even in AD&D references to Barsoom are found throughout, including notably in Appendix N of the DMG. 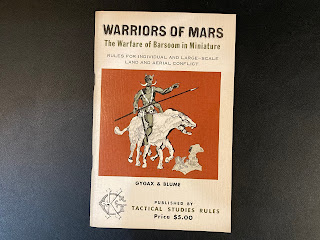 The "Warriors of Mars" rules for miniature wargames, was published by TSR in July, 1974 just six months after the original D&D rules. Written and designed by Gary Gygax and Brian Blume, and lavishly illustrated with 24 interior drawings by Greg Bell.

They are a standalone set of rules for adventures on Barsoom.  It is clearly not a roleplaying game, there just isn’t enough there in ways of creating or describing a character, but it does have some RPG like elements such as 1:1 combat and movement, character advancement levels, and suggestions how to make personal adventures. It is a wargame closer to Chainmail than to OD&D.

The forward by Gary Gygax states "this project was done at the request of the firm which originated the miniature figures for this singular aspect of wargaming".  According to Jon Peterson's book Playing at the World the firm is identified as Hinchliffe Models which later became Heritage Models.

The Edgar Rice Burroughs estate contacted TSR with a cease and desist so to avoid any legal action, the book was never reprinted. Which is a shame as there doesn’t appear to be anything in Warriors of Mars that wasn’t already in the public domain. This makes this one of the rarest hard to find and most expensive TSR books. Copies come up occasionally on ebay for hundreds of dollars. PDF copies are easy to find online with a little searching.

The book is divided into Land Warfare, Aerial Warfare, and Characters, & Creatures, followed by a series of combat tables.  There are also maps of Barsoom.

Individual melee involves rolling 3d6 and the result compared to attacker vs. defender on a rather dense table in the back which looks reminiscent of the Fantasy Combat table in Chainmail. There are 2 rounds of melee each turn.

Missile fire is a novel system: roll 2 dice, The first is the target number to match or beat in order to score a hit and it is modified by the attackers status, weapon, range, and so on. The second die is the roll to hit that target number.

Individual adventure guidelines describe unexpected encounters, time, and movement. A rudimentary experience and advancement system is described for characters to rise as high as 12th level. John Carter is 13th level. Fighting men and assassins are the only things mentioned that could remotely be considered “classes”. 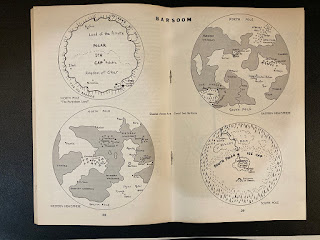 Adventure locations such as exploring deserted cities, or delving into the black pits beneath are only given a brief paragraph and a suggestion to consult D&D.

With movement rules, individual combat, experience, and encounter charts there is almost a proto rpg lurking in this game, but to turn it into one would take about as much effort as it would take to turn Chainmail into an RPG.

Aerial combat is given the most attention with rules for movement, fliers, fire, elevation & depression of guns, damage, ramming & collision, grappling, boarding, bombing, air-to-ground combat, fire at structures, and ground-to-air fire, with tables for resolving these combat situations.

There are also short descriptions of the various creatures like white apes, darseen, malagor, and orluks.  It mentions that other animals are not covered, since they are already described sufficiently in the novels.

"Warriors of Mars" is a standalone wargame, related more to Chainmail than to D&D, the enthusiasm for Barsoom shines through and this piece of gaming history provides a glimpse of what could have been if the tales of ERB had become the prominent backdrop for roleplaying adventures.

Warriors of the Red Planet RPG 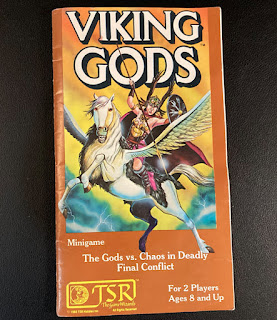 A short review of the 1982 TSR minigame Viking Gods.

In the early 80's TSR published several minigames. They were ubiquitous in book and game stores all throughout the US. Were they any good?

Viking Gods is a Norse mythos themed war game simulating the battle of Ragnarök between the Gods of Asgard and the Forces of Chaos lead by Loki. 2 players, competitive, 1-2 hours. Rules are simple enough an 8 year old, or even younger can grasp them.

The goal for Chaos players is to destroy Yggdrasil.

The goal for Asgard players is to defend Yggdrasil and defeat Loki.

It is a simplified war game. Each turn players may move each piece up to 2 spaces until they encounter an opponent, then they may not move. But they can engage in combat. Pieces are either defeated, pushed back a space, or the combat is a draw. With a simple die roll on a combat table.

The table is a sort of primitive predecessor to the FASERIP column shift system with the columns determined by the defender's strength subtracted from the attackers strength total.

There are two rules categories: Basic and Advanced. The basic rules are a little too vanilla. The advanced game gives each piece a special ability that makes combat and tactics much more interesting. Even the advanced game is simple enough that an experienced gamer could just start with those. The rulebook includes more background text on Norse mythology than necessary to play, but is fun to read.

One challenge with the advanced game is that the tokens are plain and do not have their special ability printed on them, so there is constant referring in the rulebook to the chart that explains their abilities. There are custom tokens that are better to use because the token's effect is printed on them. See the custom tokens.

The combat table is reportedly misprinted, here is a corrected version along with the custom tokens CLICK HERE: 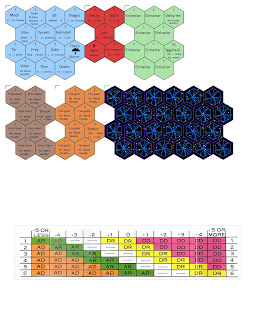 Today I drew a Pumpkin King character to celebrate the first day of October. Fall is my favorite time of the year, I love the colors, the weather, and the season. 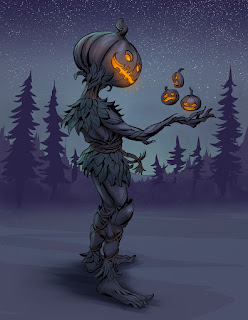 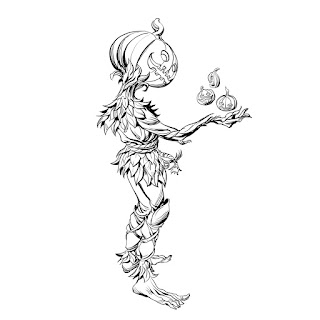 These drawings are available as clip art on https://www.drivethrurpg.com/product/330720/Pumpkin-King-Clip-Art that you can use in your independent game book.