Dragons of the Forsaken Desert features a lot of crunchy mechanics, great art, and Dragons! This is the set that I've always felt got everything right. There is no errata and no typos (so far noted!), each card is useful at all times, so you may not need that +1 Melee right now from your Scroll of Might, but its recover 1 Life ability is good to have on hand. Every card in the set is designed with this in mind. Even monsters scale well relative to their opponent's strength with "add opponent's Level..." on several of the monsters. 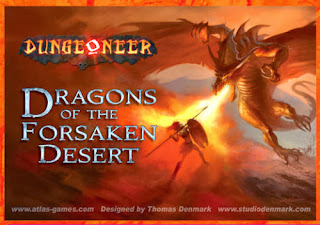 This set has been out of print for a while, and I was amazed to see it is going for $495 or so on Amazon! Well good news, Atlas Games has found a way to get it back in print.
Print on Demand.
Ok, I know what you are thinking. Lousy print quality and flimsy cards. I thought the same thing too until Atlas Games sent me a proof copy. Wow, POD has come a long ways. The quality is right up there with offset printing.  The card stock is the same used in the sets printed by Carte Mundi. The colors may even be a little sharper. It is a really good product. The only drawback: no box.
Well, that's ok, I know a lot of you put your Dungeoneer cards into custom boxes anyways. I know I do.
If you are looking to pick up a copy of Dungeoneer: Dragons of the Forsaken Desert, mosy on over to Drive Thru Cards and order one here.
Happy Dungeoneering.
No comments: 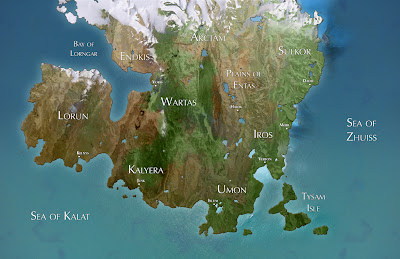 Roll 1d6: Creation
1: the gods sang a song, and the lyrics created Warlor. One sour note created evil.
2: a shard of heaven fell and the crash created Warlor. One piece scarred the face of Hatok the most beautiful god, who was so incensed his anger created evil.
3: the lords of creation came together and palavered to create Warlor where they could test their faithful, one lord turned against the others and introduced darkness and deception to the world.
4. a rift was torn in the fabric of the multiverse and a god fell through, the shockwave where she fell created Warlor.
5. ancient aliens, seeking refuge from an enslaved homeworld, terraformed a rocky world and called it Warlor.
6. A god and a demon had an argument, they created Warlor to settle the issue.

How the Warlor map was created.

Step 1.
In Photoshop a blank file was created and the Clouds filter was used on a blank layer. Levels were used to reduce the image to black and white, adjusting slightly between how much black or white in order to create an interesting silhouette. 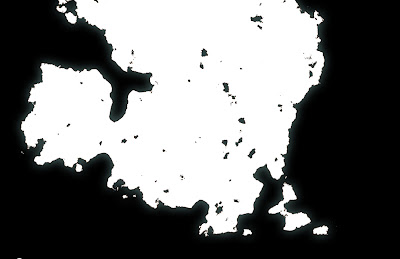 Step 2.
I found some interesting terrain textures by searching for satellite images. Then hand edited them to fit the contours of the map. 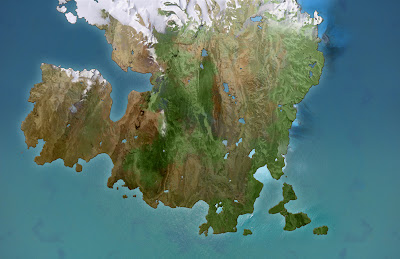 Step 3.
Generated some interesting fantasy names by finding a fantasy name generator (there are dozens out there, in this case I used http://rinkworks.com/namegen/ ). I chose the names I thought sounded cool, slightly modifying some of them. 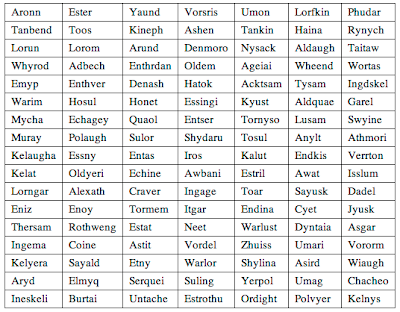 Optima.
There has been quite a bit of discussion about this font because of the recent Yahoo logo remake. So I decided to use this font. It is a strong stately font, very legible, and projects strength and class. I like its legibility.