While doing some research on castles and privy construction I stumbled across the occupation of gong farmer, something I vaguely recall having read about before. This instigated further research. I wrote up an early version on a post back in September. Since then it has been refined and playtested. It sounds a bit silly, but we had a lot of fun. Along with that came some expanded details on castle construction as related to waste management. A serious an important element that is left out of the LBB's and most other stronghold construction rules. Privies and cesspits are serious and necessary elements for any castle and also offer up plenty of useful items for adventuring possibilities.
The full write up is complete and available on DriveThru. 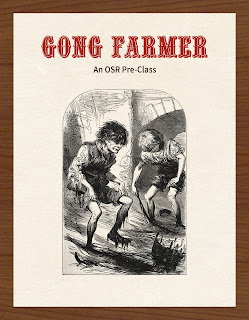 Gong Farmer, a 0 level class for OSR games.
Counterintuitive to expectations, playing 0 level characters is quite fun. There is something exhilarating about the fragility and lack of special abilities where they are not good at anything and one blow may kill the character off. This forces the player to rely on their wits, creativity, and imagination rather than staring at the character sheet for answers to solve a problem.
Real life is often stranger than fiction. The gong farmer, or waste management specialist if you prefer, was a necessary and lucrative career. A perfect start to an adventurer’s life. Suddenly the idea of switching careers to become a cleric doesn’t seem so bad after all. This character class came out of a bit of research on how castles were actually constructed, and a few game sessions playing 0 level characters. It was a lot of fun, and hopefully you’ll have fun with this character too.
More than just a character description this supplement includes other useful resources:
Also includes full illustrations and a minimalist OSR basic style character sheet.
https://www.drivethrurpg.com/product/337293/OSR-Gong-Farmer-Class
No comments:

A while back I wrote about the Social Status score. While I think that Gygax and Arneson nailed it near-perfectly with the standard six abilities, if there was room for one more it would be some sort of Social Status stat.
Here that original article is developed and refined into a system that can be added to any OSR game. All of the information and research was refined, like panning for gold into a clear, concise, uncluttered rule set that can add something to just about any fantasy campaign. In particular the Warriors of the Red Planet roleplaying game mentions Social Status during character creation, but doesn't describe it much further from there. In the source material it is an important element in the sword and planet stories with space princesses to be betrothed and evil emperors to be overthrown.
This supplement is a perfect addition to that game. It also includes a folding character sheet that would fit in your original White Box (or Woodgrain Box if you are so lucky) done in a minimalist basic OSR style with room for this new ability.
Available now: https://www.drivethrurpg.com/product/336444/OSR-Social-Status-System 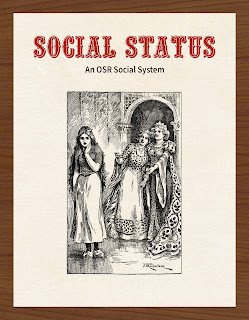 Now available, the OSR Elf. No longer part time fighter part time spellcaster, now it is a full time class that doesn't split its experience points. It is carefully balanced with the other original edition classes. Also includes a nifty old-school style character sheet fully illustrated specifically for the Elf, and also a blank version. That alone is worth the price. https://www.drivethrurpg.com/product/336205/Elf-OSR-Class 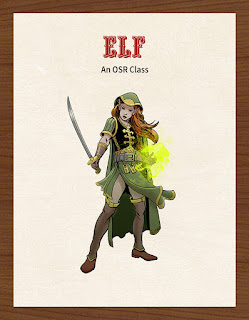 See the previous work in progress version here And the discussion on ODD74 here.
No comments: 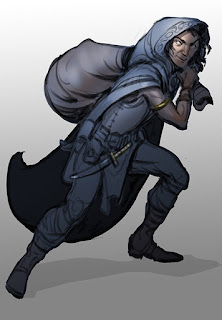 Coming into D&D in the early 80's with the red box set and then quickly onto AD&D I had no idea that there were some who'd been playing the game since its release in 1974 that considered the Thief class to have broken the game.

While I very much enjoy the original LBB (little brown books) that are so bare boned there was only 3 classes: Fighting-Man, Magic User, and Cleric. I find that Greyhawk really completes the original set.

There is general agreement that Greyhawk which introduced variable damage and hit dice, ability score bonuses and penalties, and a variety of other things really fixed the game. Yet the thief seems to have stolen some of the primary things players were doing on adventures that hadn't quite been systemized yet: sneaking around and stealing stuff.

The thief is a staple now of just about any fantasy roleplaying game. Enjoying a special niche all their own separate from the fighting ability and spellcasting ability of other classes.  There is however a problem with the thief that I haven't seen much written about. That is how bad they are at their character abilities.

A 1st level thief can pick pockets with a 20% chance of success. You know from actually playing one that is terrible, there is an 80% chance of getting caught! All those other things are so bad there is hardly a point in even trying until higher levels, 15% to open locks? 10% to remove traps? Oops! Triggered again, the party is dead. Yikes. What if we got rid of all that stuff and they were really good at one thing first. What if pick pockets started at a 60% chance of success? Now we're talking. Then it could improve at a slower rate and eventually become very proficient.

What if they slowly acquired the other abilities as they leveled up?  Then they would be in synch with the other classes. With this idea in mind here is a reimagined Greyhawk-style thief class. A note on terminology, a few things are changed to be more generalized; for example the general term pilfering instead of the specific term pick pockets. Or climb instead of climb walls.

Each level opens a new Thief Class Ability. Success is not determined by a percentage, an idea I find doesn't fit the rest of the mechanics of the game, but by an ability check. The GM could adjust the difficulty of the task up or down. If the victim is attentive and other leery viewers in the area a pilfering attempt may be more difficult. If the victim is asleep success may almost be assured with only a roll of 1 waking the target up and getting caught. The level of the character and dexterity adjustment may be added to the roll of a d20 for success. 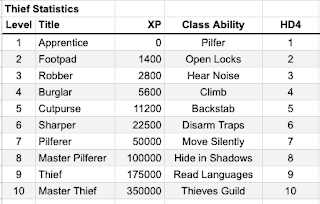 Pilfer: at 1st level the thief can filch small objects, pick pockets, and palm small items without being noticed.

Open Locks: at 2nd level the thief can open any lock given enough time and with the right tools.

Hear Noise: at 3rd level the thief is sensitive to sounds others may not notice, and identify what they are or what someone who is speaking in a language they understand is saying.

Climb: at 4th level the thief can climb sheer surfaces including walls and cliffs.

Disarm Traps: at 6th level the thief can render a trap inoperable given enough time and the right tools.

Move Silently: at 7th level the thief can move at half speed without making a detectable sound.

Hide in Shadows: at 8th level the thief can become near invisible when lurking in shadows, they may slowly crawl at a rate of 1”.

Read Languages: at 9th level the thief can read any language they may have reasonably come in contact with, including magic. This ability allows them to use magic-user scrolls, though with a high degree of error. Reading languages excludes lost, ancient, extremely foreign, or dead languages that would require special knowledge to know.

Thieves Guild: at 10th level the thief becomes the master of a local thieves guild in a fortified hideout, usually in a seedier part of town, that will attract 2-12 apprentices. This hideout is difficult to find and infiltrate. They will also have political influence with corrupt officials and powerful criminal elements.

More adventures in redrawing classic stuff from the old LBB books. It is fun looking at them and reinterpreting how I'd draw them. 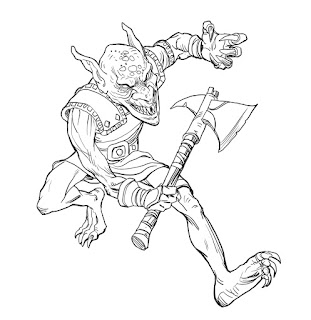 Here is the original drawing from the Monsters & Treasures book. I didn't put in the heavy black shading in case I want to color it later. 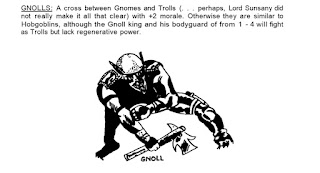 My daughter convinced me it'd look much better with the black shadows filled in. Also, that I missed his helmet. 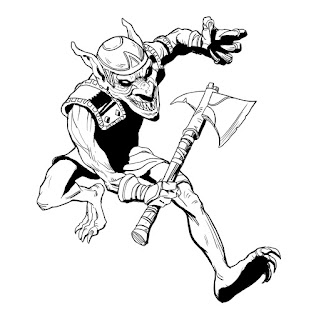