Beastie: the furious Fallen One

What's this, two beasties in the same week? Merry Christmas! Or, maybe, considering the content of this post merry Krampusnacht. I want to thank you so much for taking the time to read this blog. These beasties posts tend to be among the most popular, and I do enjoy drawing them and designing their stats. I'm thinking in the New Year of being more regular about posting lots more nasty little critters to challenge your characters with.
A lot of times these beasties start out as rough drawings in my sketchbook. This one I'd inked quite a while back, but it really wasn't up to par. While developing Beasties II this entry used that art. When it came time to post this mean little bastard I couldn't bring myself to post that old art, so I redrew, inked and colored him. Here it is five in the morning on the west coast and I'm about to hit the publish button. I hope you like. 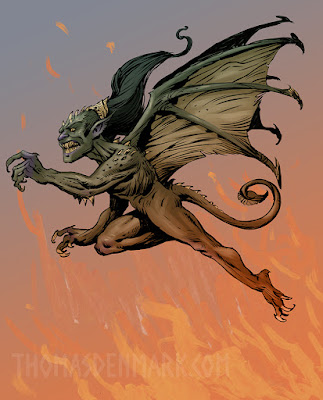 The depths of the abyss will occasionally spew forth a monstrosity known as a fallen one called Fallid Einn in the elder tongue. These are unfortunate creatures that have fallen so deep into the darkness and chaos that they have gone beyond madness to a level of insanity inconceivable to the sane mind. Their only thought is of slaughter and vengeance at all times.
Any demon of lesser HD within sight of a Fallen One will immediately succumb to its utter and complete control. If there is good cause the game master may allow the creature to make a Save to resist a command.

A fallen one radiates a field of insanity. All within a 20' radius must make a Save or be affected. Opponents who succumb will have difficulty focusing and coordinating with allies and also suffer -2 to all attacks. Other demons will go into a berserker rage having +2 on all attacks, but suffering a -1 penalty to AC.
Fallen ones usually attack in hordes. It is not unusual to see groups of 10-40 all intent on murder.
No comments: 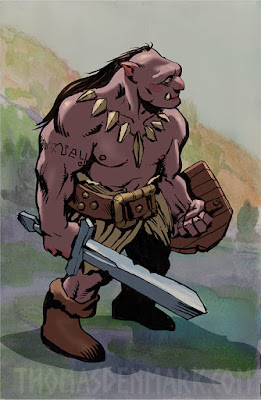 Look at just about any RPG and you'll see little variations of what are essentially the same stats defined by Gygax and Arneson in the original Men & Magic book. This set of abilities has not been improved upon by any other roleplaying game. DC Heroes came close with its 3×3 grid of physical, mental and mystical/social character stats that expressed precision, force, and resilience in each area. Which was clever and novel, but really so specific to the DC universe it wasn't widely adapted to other genres, though the idea of each number being twice the power of the previous number so as to accommodate a game with characters as diverse in strength as Robin and Superman is an admirable design feature. 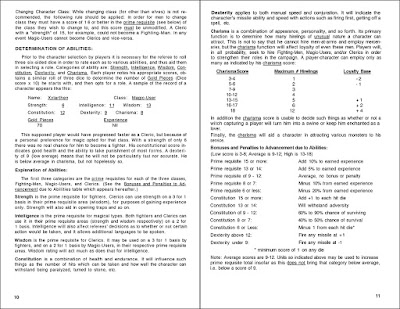 Taking a look at the wording on pages 10 & 11 of Men & Magic it is really quirky and awkward. First of all the order of the stats is random: Strength, Intelligence, Wisdom, Constitution, Dexterity, & Charisma. There seems to be no rhyme or reason to this order. It's not alphabetical. Not grouped in any meaningful way like physical/mental, or in order of importance.

Greyhawk mixes it up even more randomly: Str, Int, Dex, Wis, Chr, Con. Blackmoor doesn't really discuss abilities, and Eldritch Wizardry only touches on Dexterity with a lengthy addition to its effects in the game.

It is funny that this order remained like this and carried all the way through to 1st edition with one weird difference: Constitution and Dexterity are swapped. Why? Oh, just because. This little change seems to have first appeared in the Blue Holmes basic edition.

At least in 2nd edition an attempt was made to organize them by physical and mental stats: Str, Dex, Con, Int, Wis, Chr, but strangely still not alphabetical. You can still see the original order lurking in there. All recent editions keep this odd order. Shouldn't it be: Con, Dex, Str and Chr, Int, Wis? Or even better with mental first and then physical (M before P). This is mostly cosmetic and doesn't affect the game however it is just another example of the chaotic roots of the rules and as much as things have been polished and organized these little artifacts still linger.

Here's a little chart to make it easier to see: