Poster of HawkMoor cutaway map is now available at DriveThruRPG.

I've made a variety of cutaway maps over the years and have occasionally posted some of them here, but this one of the HawkMoor Underworld has been by far the most popular. I've seen it reblogged, pinned on Pinterest, tweeted, and spread around the net in unexpected places. It was one of those drawings where I spilled a bunch of ideas in my head down onto paper one day. You never know which drawings are going to resonate with people, and this one has. So I made it available as a high resolution download, or as a 12"x18" poster map you can put up in your gaming area.

I received my proof copy today and it looks just like I designed it. The paper stock is glossy, the blacks are dark and rich, the touches of color came out as intended. And it comes in a bubble wrapped envelope with card stock to help protect it from damage during transit. 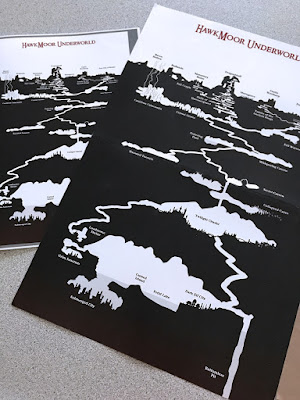 HawkMoor is a fantasy world I've been developing for sometime, really since the beginning of this blog, and piece by piece it has been coming together. If you've followed my Beasties of the Week posts you may have noticed little mentions here and there of this world. I have a lot more things set in this world to share on this blog over the coming weeks and months.

Here is the sell text which I think came out rather evocative (I say patting myself on the back):

Many dwarven cartographers perished to bring you this underworld cutaway map of the mysterious Lost Realm of Hawkmoor. Revealed for the first time are the Halls of Hammerguard deep under Dragonbluff. See how the Sewer Pits where the wererats lurk are connected to the Tombs of the Ancient Kings under Castle Werthorp.

Far under Hawkmoor are pockets of civilizations such as the Twilight Citadel where underdwellers have built a great city. Deeper still is the city of the dark elves where few dare to venture into unless allied to those sinister and zenophobic beings.

It is even rumored that a submerged city is home to one of the last remaining clans of shahada, the ancient race that spawned the sahuagin, the tritons, and the merpeople.

This large wall map is sure to inspire many adventure ideas and stir your imagination!