Making rolling up a character fair

For some time now I have been trying out a system to make more balanced characters.

The standard way to create attribute scores is to roll 3d6 in the order listed above. Once those rolls have been made, it is often obvious which type of character best fits the stats, but a player always has the option to play any character class desired. This basic method urges the player to allow the dice to choose what kind of character is played.
For those players who have no faith at all in their dice luck, they may use one of the following pre-rolled sets, assigning the numbers to whichever attribute seems proper for the type of character they want to play:
Hero: 8, 10, 11, 12, 14, 16
The Hero has very good stats in two attributes, average to high average in three, and one that is not quite up to the average, portraying the “fatal flaw” that accompanies the story of every hero.
Generalist: 9, 10, 11, 12, 13, 14
The Generalist has a couple of slightly above average abilities, but is at least average in everything. In theory he can be competent as any sort of character.
Specialist: 6, 9, 12, 14, 16, 18
The Specialist is the best there is at what he does, hence the 18 Attribute in something. He also has Heroic level Attributes in two Attributes, high average in a fourth, but two of his Attributes range from low average to poor. This portrays his total concentration on his specialty to the detriment of a fully rounded skill set.
Point systems never really feel very "DnD", and I think this system is much quicker and less fiddly anyways.
No comments:

A disturbing new semi-undead monster for your OSR game, perfect for guarding the entrance to a catacomb, or ruined temple, or anyplace a graveyard may be found. 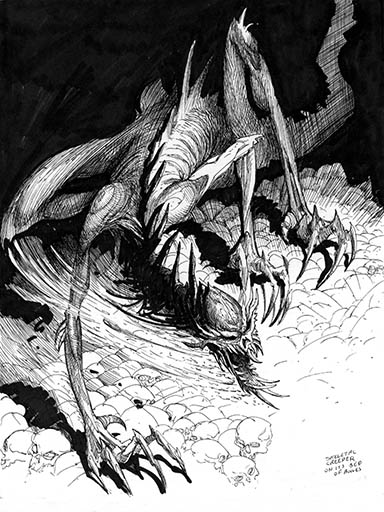 It is whispered in secret places that if an innocent is beheaded in a graveyard on the night of the bloodmoon, then a black caterpillar will writhe from the victim’s neck and burrow into a grave. On the next bloodmoon, a bonecreeper will erupt from this graveyard. An undead beast roughly 20 feet in length, it has four clawed legs, a spiny serpentine body, and a bone demon’s face. The bonecreeper attacks with its sharp teeth, its claws, and its tail. Moreover, its carrion-hide and bone-spiked body emit a stench that causes all within 60 feet to suffer a -2 penalty to hit; a saving throw must be made each round to withstand the effect. Bonecreepers collect humanoid skulls, piles of which are found in their subterranean lairs. If a party facing this abomination offers a freshly (less than 12 hours old) severed humanoid head, the bonecreeper will accept the sacrifice and not attack the party for the next 24 hours.