This was based off of one of the first paintings for The Book of Valkyries when I was starting to explore what the book was going to be about. This is a rework in ink in the style I settled on for the GD&H (Gods, Demigods and Heroes) retroclone version.

The full color artbook is still planned, but each of those paintings takes a lot of time and research, so it is a little further down the road. 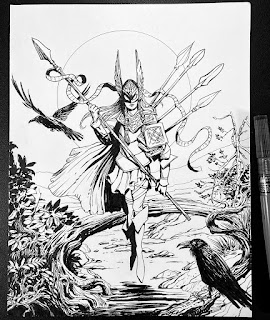 Geirahöð (battle of spears “Spear-Battle,” or “Spear of Battle”) is the Valkyrie of spears. She carries spears forged by the Dokkalfar (dark elves) that are each imbued with a unique power. Some rarely miss, others create wounds that cannot heal, another blazes with fire, while another one can freeze an opponent in place. Roll a 1d6 each time she pulls a new spear to see what its capability is. She never runs out of spears, as she uses one another materializes in her possession.

Here was the original painting: 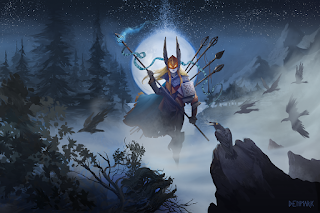 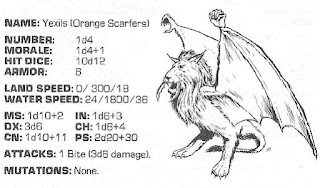 Short update on Gunslinger and Gamma World. What does Gamma World have to do with a Wild West RPG?

I don't know if Gamma World is the first non-D&D RPG I owned, but it was certainly one of the first. To this day it is still my favorite iteration of GW. That strange apocalyptic world will always hold a special place, as it came into my sphere of awareness around the time I was really into reading Andre Norton. Her book Starman's Son had quite an impact. If you haven't read the book it is basically a Gamma World-like post apocalyptic setting. Not quite as out there in wahoo-silly land, but it had its quirks.

Because of Andre Norton, Gamma World, and maybe especially Mad Max, I have a real fondness for the genre. Maybe the genre is too bleak for mainstream as we don't get a lot of post apocalyptic movies as we do other genres. Then again I guess Walking Dead falls in that category, and that show has certainly done well.

Back to Gunslinger and the connection to Gamma World. One of the features of Gamma World was the art. The interior was lavishly illustrated by Larry Elmore. I may have commented more than once that I like a lot of his paintings, but it was his pen & ink illustrations that I really like. I proudly have an original page of SnarfQuest hanging over my drawing table. In the creatures section Larry Elmore did a tiny little illustration of just about every weird mutated beast to be found in GW. And I've always loved that about 2nd edition. 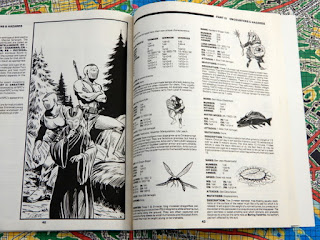 With that in mind as a sort of homage to Larry Elmore and GW 2e, I'm drawing a tiny little pen & ink drawing for just about every critter in Gunslinger. By the illustrations being so small they don't take a lot of time to draw, so it isn't really delaying completion of the book that much. And they're a lot of fun to make.

Side note. I've borrowed many creatures from the Monster Book 0e Reloaded (Monster Compendium) by Matt Finch, and modified them specifically for Gunslinger. A great resource for fleshing out the critters in your 0e game. There once was a Word Doc floating around the internet, but I can't seem to find it at the moment. 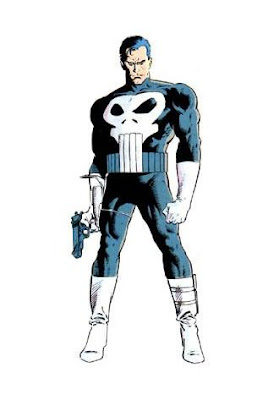 The Punisher, Rambo, and others who are pushed to the limit can exhibit extraordinary abilities. In the Guardians Superhero RPG there isn't really a class that quite captures this unique individual that is a common trope in many comic books. Here is a write up that can be used with any original edition compatible system, but is meant specifically for Guardians.

The vigilante is most often driven by a deep personal need to exact revenge or to achieve some sort of justice beyond what the Law is willing to do. Extreme circumstances sometimes push normal individuals to become extraordinary. Whether through surviving physical or emotional trauma the vigilante has toughness, perseverance, and an unusual resistance to pain. What would kill an average person only makes them stronger. The non-powered Vigilante class can stand side by side with super powered individuals, and in some cases even overcome them in combat. 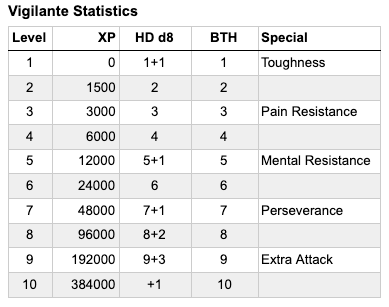 Toughness: the vigilante reduces damage done to them by 1 point per hit at 1st level, 2 points at 3rd, 3 points at 5th, and 4 points at 9th level.

Pain Resistance: the vigilante is nearly immune to torture, and does not give in to pain.

Mental Resistance: the vigilante’s single minded goal for revenge makes them very resistant to mental attacks and mind control. +4 on saves vs. those effects.

Perseverance: at 0 hp the vigilante does not die, instead they become reinvigorated and determined to defeat their foe and will have +2 to hit and damage while at or below 0 hp. They are not killed until they are at -10 hp.

Extra Attack: at 9th level the vigilante gets 2 melee attacks per turn.

Orcs Across the Editions

When making monster reference cards for my Hawkmoor campaign I did some research on stat blocks across the various editions. That culminated in the creation of a spreadsheet based on the humble Orc so they could be readily compared. The gray rows are the stats from the original edition that is (almost) common across all editions. 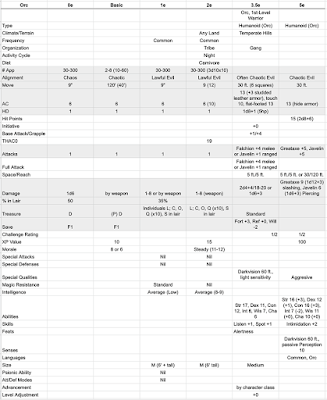 When I look at this it strikes me that the Basic stat block is both the most useful and nicely succinct. I expected 5th edition to be the most convoluted, but it is 3/3.5 that is overly complicated. Why no 4th? Meh.

The final reference card form ended up looking like this:

And this version is formatted for a standard 2"x6" bookmark:

Hawkmoor is a classic high-fantasy retroclone that emulates LBB+GH plus some of my favorite mechanics from various editions presented in an "old-school" way. It is named after the capital of Sinder, a frontier state that stands between the demonic arctic hordes of Cholizar and the warmer southern lands. It is based on Tarniss, the grim fantasy world of Dungeoneer. A co-op boardgame of the same name is also in development. 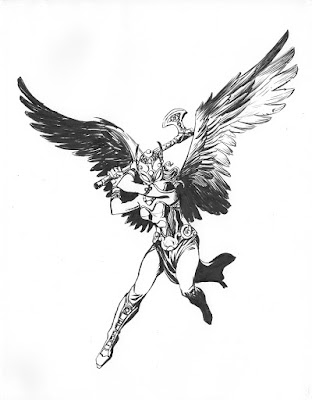 I wrapped up the section on Saving Throws and was liking how it came together and decided to give a little sneak peek here:

A saving throw—also called a save—represents an attempt to resist a trap, a poison, a disease, an explosion, or a similar threat. You don’t normally decide to make a saving throw; you are forced to make one because your character is at risk of harm.

To make a saving throw, roll a d20 and add modifiers and match or beat the number on the type of save you are making.

There are six types of saves:

A saving throw can be modified by a situational bonus or penalty as determined by the GM.

Perhaps one of the most notable differences between various editions are saving throws. By default Gunslinger uses the same saves as in Warriors of the Red Planet which roughly align with:

The Average (or General) category is for systems that only use 1 Save stat. It might be a little silly to align it with Charisma, but I like the orderliness it gives to the table. And hey, maybe force of personality is the deciding factor whether or not a character saves!
* * *
Gunslinger Strange Science in the Wild West is the prelude to the Princess of the Red Planet adventure. It is also a stand alone RPG that can provide Western adventures in the vein of the classic TV show Wild, Wild West or the cult-hit Adventures in Brisco County Jr. And of course it can be part of a larger Sword & Planet style campaign.
No comments: 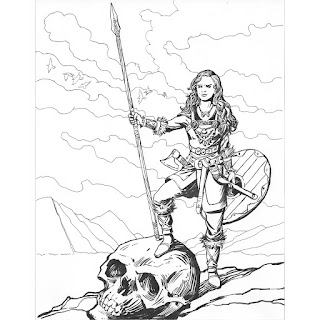 Sigrún’s name means "victory rune". She is the knower of the mysteries of victory. She was the daughter of King Hogni, and was Svava reborn.

Sigrun was due to marry Hodbrod (Hodbrodd), son of King Granmar, whom she despised and had no intention of marrying. So when Sigrun met Helgi, son of Sigmund, she urged the hero into battle against Hodbrod.

The two fall in love, and Sigrún tells Helgi that her father Högni has promised her to Höðbroddr, the son of king Granmarr. Helgi invades Granmar's kingdom and slays anyone opposing their relationship. Only Sigrún's brother Dagr is left alive on condition that he swears fealty to Helgi.

Dagr is however obliged by honour to avenge his brothers and after having summoned Odin, the god gives him a spear. In a place called Fjoturlund, Dagr kills Helgi and goes back to his sister to tell her of his deed. Sigrún puts Dagr under a powerful curse after which he is obliged to live on carrion in the woods.

The sons of Hunding, enemies of Helgi, became allies of Hodbrodd. Helgi had killed their father in an earlier war. Helgi with the help of his half-brother Sinfjotli, defeated and killed Hodbrod in battle. Hunding's sons - Alf, Eyolf, Herward and Hagbard - were also killed.

Helgi is put in a barrow, but returns from Valhalla one last time so that the two can spend a night together.

Sigrún died early from the sadness, but was reborn again as the Valkyrie Kára.

The Book of Valkyries is an OD&D style book of Norse Mythology that focusses on those fierce Shield-maidens of Asgard: the Valkyries.

A while back I did a review of the original Gods, Demigods, & Heroes. This is my effort to produce a book that is what I wish that book had been like. Also to address some of my criticisms towards the AD&D Legends & Lore books.

The first criticism is the lack of sound scholarship. I don't mean the kind of in depth knowledge a professor of Mythology who teaches at the college level would have (though that would be ideal). But something a good journeyman who studied and researched the material would have. After doing the research then taking those myths and D&Difying them. Turning them into gameable material suitable for use in any D&D campaign. This step necessitates extrapolating and even inventing beyond what is in the canon. This shortcoming is excusable in GD&H because it is more or less an amateur production, but by the time AD&D rolled around TSR had the resources to produce a much higher quality book of lore.

In the case of Norse Mythology there is really only the Eddas, and a few scraps of other material. The Icelandic Sagas, while valuable, are generally written far later than the time of the Viking era. In the case of translating to game material though anything and everything is fair game excepting more modern additions. So I'm generally avoiding the lore of modern Paganism, Wicca, and related material. Those are interesting, but for purposes of the Book of Valkyries I'd rather stick to the old stuff.