Atlas games took a chance on me, an unknown game designer, and a quirky little game called Dungeoneer. I'm so grateful for their support. And now it is Atlas Games' 20th anniversary. John Nephew, owner of Atlas Games, is celebrating by offering you, the people who make it possible to stay in business, a special birthday gift. Follow this link for details, only available to the first 250 people.
No comments:

Looking through my Fantasy Path box set and enjoying the quaintness of the graphics I struck on the idea of seeing what they would look like updated with modern graphics. A quick scan into Photoshop, some manipulated photo textures and some other Photoshop tricks and here is how it came out: 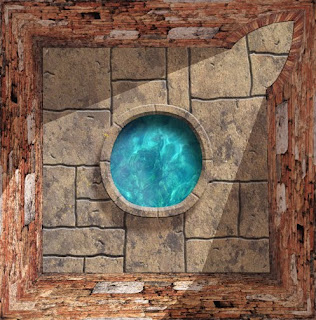 For comparison here is the original tile: 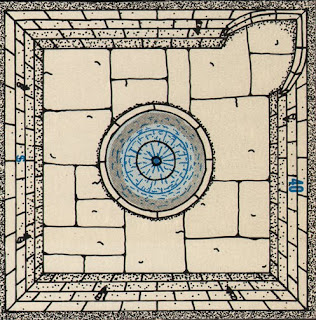 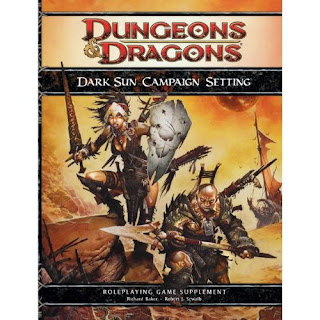 Long ago I purchased the original Dark Sun setting when it first came out. Unfortunately its release coincided with a time in my life I quit playing DnD. Basically 2nd edition turned me off and I only played intermittently from 1987 until the release of 3rd edition in 2000.

I had always been intrigued by the Dark Sun setting and did enjoy reading it and admiring the art. Brom really blossomed as an artist during this period.

It was with some trepidation I purchased the recently released Dark Sun campaign setting for 4th edition DnD. I must say so far so good. The production values are extremely high. The art is excellent, and it is making for some engaging reading. It remains to be seen if I'll make an attempt to run a game in this setting as my current Swords & Wizardry campaign (which has morphed into a Labyrinth Lord Advanced Edition campaign) is still going.
3 comments: 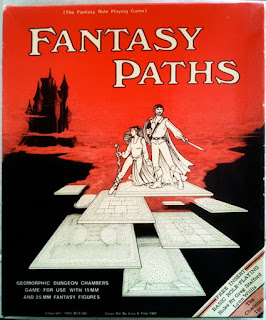 In 1981 Chaosium published a series of boxed sets of map tiles. This is the first of them called Fantasy Paths. The tiles were sturdy and printed on both sides. They are crude when compared to the slick dungeon tiles recently produced by WotC. Aesthetically the art wasn't great, but it had a charm to it much like the early 70's DnD art did with monochrome printing: brown, blue and black on an off-white cardboard. And each was numbered for convenient reference. 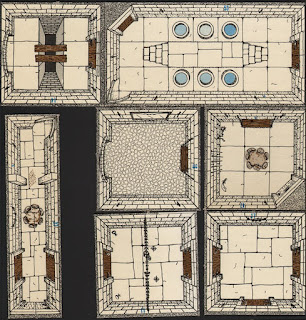 While the interesting features such as planks over a chasm or a stone circle in the center of the room make the tiles nice to look at, such specificity makes using these generically a bit harder. Furthermore the attempt to create the illusion of depth by including the walls looks nice, but eats up considerable usable space making these even less utilitarian. Yet these flaws also give them the same charm that many products of the 70's and early 80's had. They retain a hobbyist feel, rather than being a slick mass market product.

Unfortunately I missed out on these in my youth. Chaosium products were exceedingly rare where I lived (I only knew of Call of Cthulhu from ads in Dragon magazine). But I picked up the entire series on clearance at a convention once and have quite enjoyed them since.

They included a little 4 page adventure designed to use the tiles and numbered chits that could be used as a randomizer (psuedo dice) or as markers for the locations of characters and items. Also included was the introductory basic role-playing rules booklet, as it seems every Chaosium product of this era did. Making this box set a 'complete' RPG.

Afterthought. BRP (Basic Roleplaying) is considered one of the best RPG's written and is still well supported online, in particular basicroleplaying.com has a lot of excellent and free resources. Chaosium tried valiantly to create the ultimate generic rpg rules yet never quite had the success that GURPS had. I suspect one problem was the name: Basic Roleplaying. In middle and high school my friends and I wanted little to do with anything called "basic", which is partly why Advanced DnD was so appealing. Had it been given a catchier name and more widely appealing products, who knows how much more successful it could have been.
6 comments: 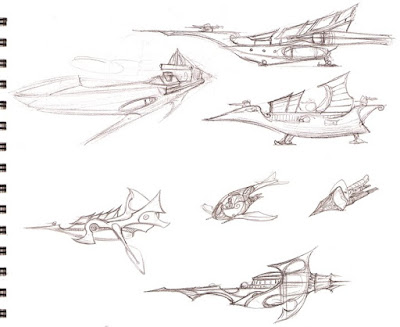 Back after a long hiatus. Straight out of my sketchbook here are some rough ship sketches I did for the excellent Warriors of the Red Planet RPG which may someday be completed. I wonder if anyone can recognize which Ray Harryhausen film inspired some of these designs.
7 comments: 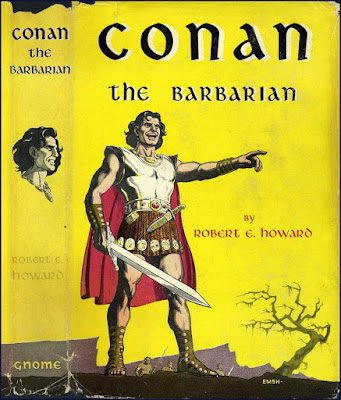 I stumbled across this image, a cover of an early edition Conan book by an artist only identified as EMSH. What I find most fascinating about this image is there is no influence whatsoever of the iconic Conan created by the immortal Frazetta (and perpetuated by Barry Windsor Smith, and other Marvel artists). I can only assume the artist was either given some scarce description by an art director, or barely skimmed the book himself.

There are hints of Roman and comic-book superhero influences, and that mocking laugh as he points is not like any image of Conan I've ever seen.

It makes me wonder if it is possible to re-envision Conan. Perhaps by researching real barbarian dress forms, and seasoning it with a bit of REH's imaginative descriptions. And if you did that, could anyone recognize it as Conan? Or is Conan's form permanently marred by the common perception of who he is?
5 comments: