The final document for Dungeoneer Deluxe, simply called "Hero's Guide" is now in layout. There are still some loose ends to tie up in the back end of the book, various things like using other Dungeoneer sets with it and some optional rules. But I can really start to see the light at the end of the tunnel. This is a huge milestone in the long saga of developing this game. 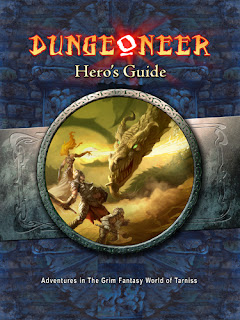 Still have some illustrations to finish for the cards themselves. By some of course I mean lots. :)
1 comment: 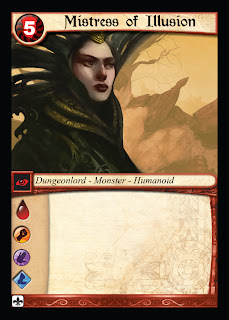 One of the fascinating things about product development is refining the components that will come in that product. There are a lot of factors, not only the game design which is the primary motivation. But also the cost of materials, the opportunities for higher quality components if you just adjust the design a little, and any number of other little things.

Since Dungeoneer Deluxe has been in development for so long, I've reached the point where I really want to publish it and get it out to you! I don't like the word compromise, I prefer to think of it as practicality, but I have been focusing on taking this design that has been worked on for so long and making sure it can be published. What this means is that instead of being "vaporware" it will someday, soon, be a real product.
No comments: 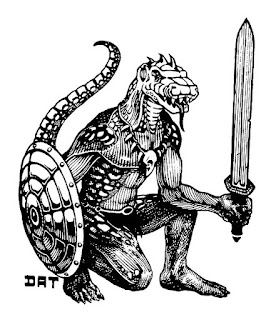 This has always been my favorite lizardman illustration.
6 comments: 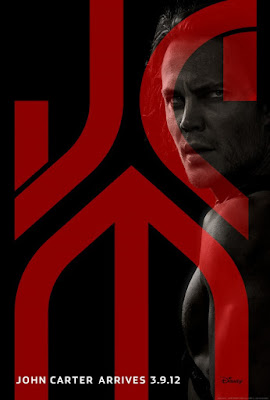 My latest acquisition. I finally gave in, bit the bullet and purchased this unique piece of roleplaying history. While it is a wargame, it really sits in that weird space between rpg and wargame that so many of these games did in the mid 70's. It does include rules for 1:1 combat, and used in conjunction with the LBB's you could easily make this into an RPG, in that same spirit of individualism that early D&D had. 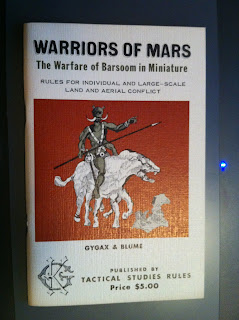 If you don't know the history of this book it is really quite interesting. Gary and Brian put this together without permission from the Burroughs estate, and were almost immediately told to cease printing and selling these books when it was published. So I don't think there are a whole lot of copies out there. 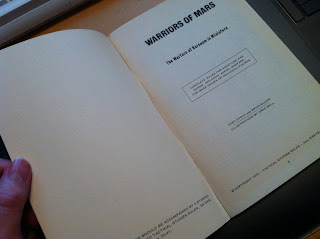 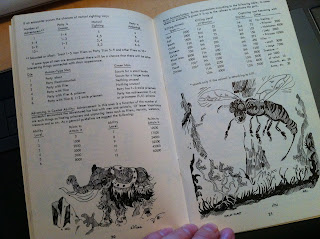 This book has that endearing early TSR quality, but I don't think it is as good as John Carter, Warlord of Mars Adventure Gaming Handbook by Heritage Models Inc. (though, thankfully, it doesn't have Princess Points!) 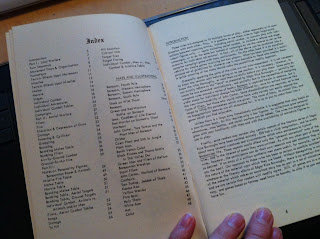 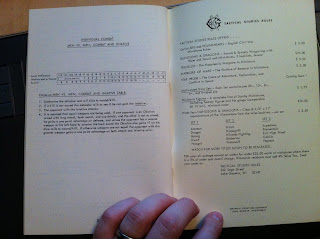 I've had a PDF of this book for some time, but the actual book is much better than I thought it would be. By today's standards it is not particularly well written, organized, or illustrated - but it certainly has charm. I'm hoping that next year's John Carter movie will be wildly successful which might make this book just a little bit more valuable. :)
3 comments:

Look Back: The Book of Marvelous Magic 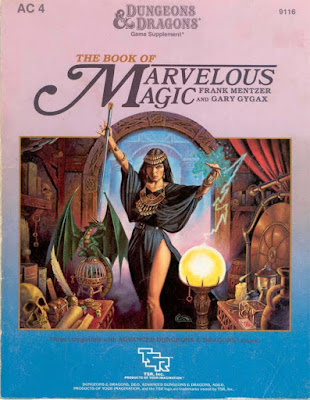 The Book of Marvelous Magic is a compendium of interesting magic items to use in your D&D games (as opposed to AD&D).

This book evokes deep nostalgia for me. Even though in 1984 I was in a frame of mind that considered AD&D to be the "real D&D", and anything for basic to be "for the kids".

When this came out I considered Clyde Caldwell to be TSR's "best" artist (my opinion has since changed considerably) so I thought this cover was grand. So when I saw this at the game store I snatched it up using my meager allowance money, brought it home and eagerly read through it. Looking at it now, over 25 years later I consider the cover art to be perfectly serviceable, but certainly not the greatest art on a D&D product.

It is notable that this book is the last thing Gygax wrote that could remotely be considered "original D&D" material. Not AD&D.

The variety of magic items within seemed inspired and eminently useful. I immediately put them to use in my D&D games (oh, the days when I had so much free time to play!) and I vaguely recall having considerable success in using this book. Really, it was one of EGG's better efforts.

Looking through it now I wonder how much of it EGG wrote, and how much of it is Frank Mentzer's. I see little evidence of EGG's distinctive prose, in fact it is mostly quite dry. What I suspect is that EGG wrote a bunch of ideas for magic items and Frank was left with the job of detailing them out.

Skimming through it now I still love this book. It is chock full of great (and some not so great) ideas, but many, many of the magic items are very useful regardless of what system you are using. For example I like that so many of the items are not just your typical wand, boots, or other mundane item. Such interesting things as Figureheads, Hammocks, Kites, Soap, and Spinning Wheels make their appearance here. It reminds me of how staggering Gygax's imagination really was.

I think I want to start using this accessory again, it's been a long time.
2 comments:

I drew this in high school at a time when I became obsessive about drawing. I drew on the tabs between my class notebooks. Usually dragons and chicks. 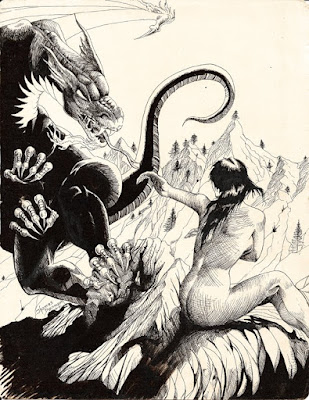 I can see the influences of Boris Vallejo and Larry Elmore.
8 comments: