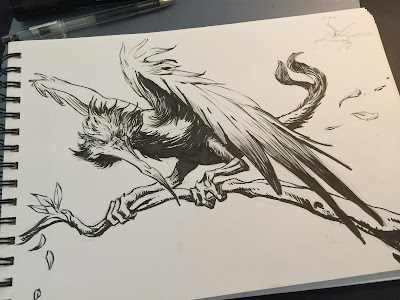 A dire stirge’s coloration is dark red with a dirty yellow underside. The proboscis is blood red at the tip, fading to deep satin black at its base.

A dire stirge’s body is about 2 foot long, with a wingspan of about 4 feet. It weighs about 2.5 pounds.

A dire stirge attacks by landing on a victim, finding a vulnerable spot, and plunging its proboscis into the flesh. If a stirge hits, it uses its powerful clawed feet to latch onto the opponent’s body. An attached stirge is effectively grappling its prey.

A dire stirge drains blood, dealing 2d4 points of damage in any round when it begins its turn attached to a victim. Once it has its fill (around 8-16hp of damage), it detaches and flies off to digest the meal. If its victim dies before the stirge’s appetite has been sated, the stirge detaches and seeks a new target.

A day of rest and eating will replenish half the hit points lost.
No comments:

This is such a cool video.