I don't post that much about Raiders, though it is a genre every bit as interesting as Swords & Sorcery, Superheroes, and Sword & Planet. When designing Raiders one of the challenges was what classes to keep. There were a little over a dozen in the first draft, but it was whittled down to the four basic classes that made up the sort of ideal Raiders adventuring party.

I stumbled across this blog that has been posting some interesting content for Raiders, including a new class: the Martial Artist.

The new Marvel film Shang Chi was much better than the trailers advertised. It would be fun to put some of this action and storytelling into a Raiders campaign.

This class can fit well into pulpy archeological adventures in the early 20th century. At the time from what was considered the "mysterious Orient". Before Bruce Lee martial arts were a little known peculiar fighting style that the West didn't know much about.

This interpretation is more of a sort of specialized Mercenary, a pretty good approach to maintain the simplicity of the Raiders RPG. Check it out: 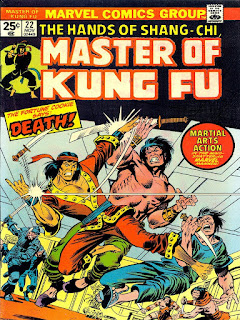 The bitter cold air raked our throats like a Sinderan witch's claws with every breath. We'd trekked across the bleak tundra for a week now without a single living thing in sight. Not even a bird. The land was cold and hard, each step on the frozen ground shot icicles of pain up our legs. We were famished, our supplies depleted days ago.

The ground began to tremble, the icy field cracked open and a giant shelled monstrosity burst out of the ground. "Get back it's a naesehorn!" I yelled, using the native name for the hungry arctic tortoise that was snapping at us.

Narrowly avoiding having a leg removed by the razor sharp jaws, I pulled my battle-axe out, bit my shield to engage my inner rage and charged the beast. My only hope was to sever its head by landing a blow on its neck, the only vulnerable part of the hard shelled scaly foe.

Behind me I heard Valgris reading aloud her runes to summon strength to empower my axe-arm. The arcane energy surged through my muscles and in a howling rage I unleashed the full fury of my blade upon the fell beast. My axe cut through scale and sinew, thick blue-green blood spewed across the tundra as the beast's head fell to the ground and the shelled carcass collapsed. I stumbled back, feeling the drain of fatigue caused by having stirred my rage.

"Good news is we have meat to eat. The bad news is I can't stand turtle flesh. Aah well, hunger is the best seasoning." I remarked while standing over the remains.

"Tortoise" Valdris corrected as she pulled her hunting knife out to begin carving the creature up for dinner. 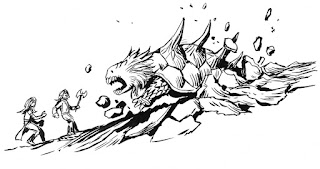 Cold Resistance: half damage from all cold based attacks.
Burrowing: The naesehorn can burrow into frozen ground by heating it, and sinking just low enough to cover its body. This takes 3d6 turns. The ground will then freeze again. It does not travel underground.
Surprise: a burrowed naesehorn cannot be detected by normal means, it senses prey on a Tremorsense check within 20’ and can burst out of the ground to attack.

Native to the northern sub-arctic regions of Sinder and the tundra wastelands, the naesehorn (nay-seh-horn), or arctic tortoise, is a giant hard-shelled tortoise adapted to freezing temperatures. It appears to have a hair like mane and tufts, these are just very thin long scales that trap air and insulate the creature. It remains very sedentary but is capable of uncanny bursts of speed that belie its massive size. 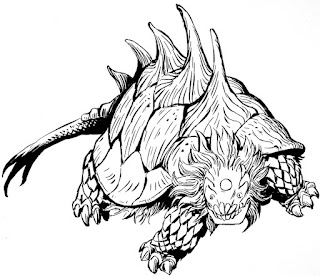 I'm experimenting with the creature stat block for the monster listings in Hawkmoor. It is inspired by every edition of DND in some way. The main goal here is to provide all the information readily available without burying important details in text blocks. I'm still considering adding terrain or something about its ecological niche.

Tower of the Moon - The Fantasy Trip Edition

Gaming Ballistic has picked up Tower of the Moon and converted it to the recent The Fantasy Trip system. It is whole new layout and additional content and maps. They did a bang-up job and I recommend it if you are interested in that game system.

They are also helping to publish a new edition of the OSR version that Night Owl Workshop made a while back. It is an updated version with a few new bits and maps. The hardcopy version is quite good, much better than print on demand.

Head on over to the crowdfunding page to check it out: https://gamingballistic.com/tower-of-the-moon/