A common misconception is that Chainmail was TSR's first book and out of that came OD&D. The history is much more convoluted and interesting than that. 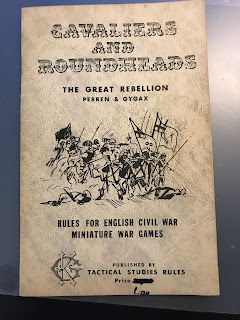 Cavaliers & Roundheads was TSR's first publication, and the sales were intended to help fund publishing OD&D. In a cruel twist of fate things went awry and the history of TSR became a convoluted mess after that. But that is another story.

OD&D was already well into development when Cavaliers & Roundheads was published. So this game had little impact on OD&D except in a few cosmetic ways. The format of the book: saddle-stitched digest sized. A cover that established the basic layout printed monochrome on textured paper. Plain san serif font body text, clean simple layout. Crude amateurish art.

Cavaliers & Roundheads is like a cliff's notes version of Chainmail. It is succinct, to the point, has no fluff except a couple of pages of art describing uniforms. And it is musketeer-like focused on its topic: the English Civil War of 1642. No dragons, no uber powered Landsknechte, just English, Scottish, and Irish troops battling for the political fate of the Kingdom of England. Even if you're not a history buff you've no doubt heard the famous name Oliver Cromwell, this war is why. 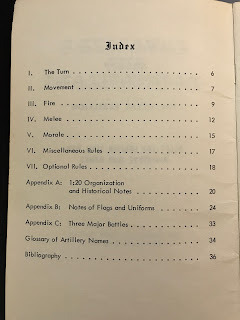 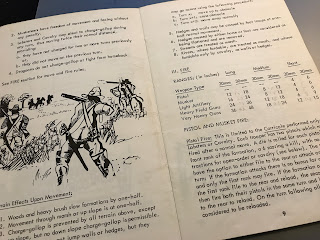 Skimming through it the system appears very similar if not identical to Chainmail. Considering it has the same authors that isn't surprising. I just got this copy and am still reading through it, I hope to get a few play tests in to get a feel for how it works. I've started a post over at ODD74 if you want to follow along as I read and comment on it.