Beastie of the Week: Torchiere Corpse 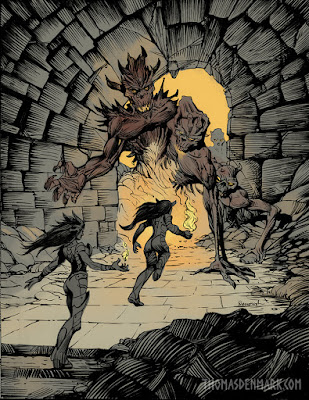 The torchiere corpse is an ultra rare and unusual undead creature that can only be created under bizarre circumstances.

In this case evil bodiless souls in search of flesh to inhabit can form the ashes into a monstrous giant beast. The souls will vie for their piece of the undead creature and a flaming hot conglomeration of giant body parts will arise hungry and full of rage.
Infernal radiance: a torchiere corpse continually radiates an unbearable heat in a 30' radius. The closer one gets the more unbearable the heat is. Save each turn or take 1hp damage within 20' and 2hp per turn within 10'.

Rage: once a torchiere corpse is attacked it may become enraged and have +1 to hit on all attacks.

Life Drain: on a successful hit the victim must Save or take an additional 1hp damage, this confers 1hp of healing to the torchiere corpse.

Random Multiple Attacks: each turn the torchiere corpse gets an additional 1d4 melee attacks as various souls vie for control of the conglomeration of body parts to attack with.