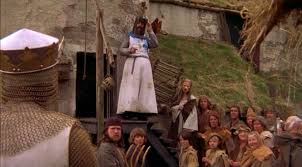 On page 10 of Men & Magic a simple formula for starting Gold Pieces is given:

"Each player notes his appropriate [ability] scores, obtains a similar roll of three dice to determine the number of Gold Pieces (Dice score x10) he starts with,"

It was noted on the OD&D discussion forums that this can be interpreted as your character's Social Status. It has the exact same range 3-18 of all other abilities, is determined the same way, and is in the same step of character creation.

Today I was re-reading issue #70 of Dragon Magazine from February of 1983 and stumbled across an article by Gary Gygax describing a Social Status system for Advanced Dungeons & Dragons. He hints that it will be in the forthcoming expansion volume. I assume that became Unearthed Arcana. In his typical Gygaxian way he systematized social status into multiple tiers from Lower Lower Class, to Middle Middle Class, to Upper Upper class and everything in between. Also adding birth tables and corresponding Non-Human races.

So taking off from there here is a proposal for a very "white box" Social Status stat:

First born generally inherits most or all the wealth, land, and titles. Subsequent born inherits proportionately less. In some cultures the children inherit their parent’s debt as well.


Your class could have an effect, so each 2 or 3 levels you could gain +1 to your Social Status. There would be certain perks associated with them, advantages and disadvantages to each tier.