A Princess of Mars Adventure - Chapter 5

Chapter 5 I Elude My Watchdog

Book Summary
Sola leaves Carter alone in the prison guarded by Woola. Captain Carter ponders the strange anomalies so far encountered: his guardian Sola, a Martian watchdog, the large plant that provided both food and drink, and the sudden onset of nightfall on Mars. Innately curious and prone to seek adventure, Carter tests the role of his watchdog by leaving the building. The animal stays with him to the edge of the city. Carter realizes that the only means to escaping his loyal, ferocious protector is his unique ability as a jumper. Landing on a sill 30 feet above the ground, Carter's exultation is short-lived when he falls into the grasp of a colossal ape-like creature.

Adventure
Characters are left alone in the prison guarded by a Calot (Woola)
If they attempt an escape the calot will try to prevent it.
If they do escape they will encounter giant white apes.
Defeating the apes will give them credit with the green martians

Reworked the Ancient City Ruins map a bit, it is likely to continue to be refined further. 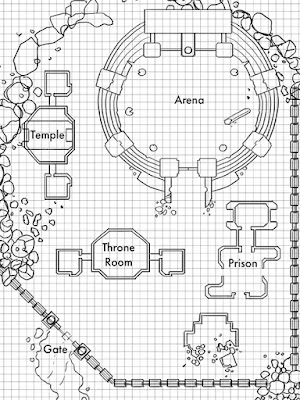