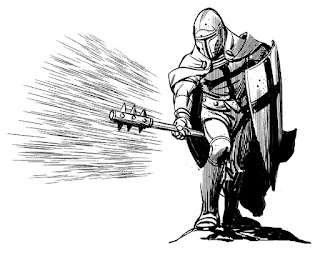 Trained as both monks and knights the Templar Order adheres to a specific code of behavior. Knights are to take their meals in silence, eat meat no more than three times per week, and not have physical contact of any kind with women, even members of their own family. They may own no more than four horses and must dress in a simple manner.

As a monk they are dedicated to serving their deity, as a knight they pledge fealty to their lord.
Templar knights are always noblemen. They are equipped as heavy cavalry, with a horse and a squire. Squires are generally not members of the Order but are instead outsiders who are hired for a set period of time.

Templars are granted spells according to the Cleric spell list starting at 2nd level. 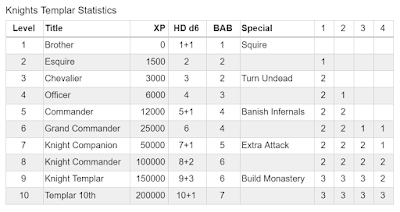 Turn Undead: at 3rd level Templar can turn undead as a 1st level cleric, increasing in ability from there.

Extra Attack: at 7th level the templar gets an additional melee attack each round.

Build Monastery: At 9th level the templar establishes a monastery that may attract sergeants, skilled laborers like blacksmiths, chaplains, servants, and other monks and knights. As the Templars are both knights and monks, their commanderies are both castles and monasteries. Though defensible and strategically located, their castle has all the architectural features of a monastery: church, chapter house, cloister, refectory, dormitory, etc.