A Princess of Mars Adventure - Chapter 6

Chapter 6 A Fight That Won Friends

Book summary:
After Carter escapes his imprisonment and nearly eludes Woola a giant white ape-like creature and its mate attack. They have six limbs like the green men. Woola saves Carter from being smashed by the female's cudgel. Woola is endangered, Carter grabs the cudgel to defeat the female ape. Carter could use this opportunity to elude the male ape, but feels a sense of duty to rescue Woola.  Carter employs earth tactics with the cudgel and finishes off the male ape. The green martians are impressed by Carter's victory over the apes and wins their admiration. He also wins the devotion of Sola by saving Woola from being terminated by Tars Tarkas' gun.

Player actions:
If (when) the characters escape the prison White Apes attack
If the characters befriended a calot it will fight valiantly for them but will be killed if not helped.
Defeating white apes will win the admiration of the Tharks.
Saving the calot wins the devotion of Sola.

Rereading this the white apes were more intelligent than I remembered, for example they are using cudgels as weapons. I realize my impression of them was formed more by Frazetta's art than the text of the book. 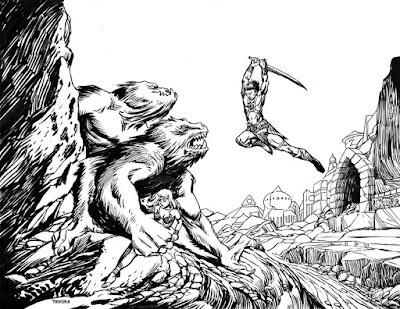 Calot
HD 5; AC 6[13]; Atk: 1 bite (1d10); Move 12; Save F5; CL/XP 6/400; Special: Speed Burst 360' for up to 6 turns, 1 hour rest to perform again.
Calots are about the size of a Shetland pony, with ten short legs and a frog-like head, and a small amount of bristly "hair". They are the fastest creatures on Mars. Calots were domesticated by the Green Men who use them for multiple purposes such guard animals and fighting for entertainment in their arenas.

Ape, Giant White
HD: 6+6, AC: 4 [16], Atk: 4 fists or club (1d6 each, or 2d10), Move: 15, Save: F6, CL/XP 7/800.
These hideous, enormous apes resemble Earthly gorillas, but they are snow-white, stand nearly fifteen feet tall, and have four powerful arms. They are hairless except for a shock of stiff hair at the top of their heads which only increases their savage appearance, and are cunning predators, capable of scaling nearly any surface with ease. Many are devastatingly proficient with a club. These selfish beasts will try to kill silently if possible, but will not hesitate to howl for friends if seriously over matched. Some larger specimens have 8+8 HD.