A Princess of Mars Adventure - Chapter 7

Book summary
After breakfast in the dead city, John Carter, Sola and Woola the watchdog, accompany a huge caravan of chariots and armed mounted warriors to the hatching ceremony at the isolated tribal incubator. Every five years, the best 500 eggs presented by the females are selected for a five-year incubation process in the solar heated, sealed incubators. The Earthman watches as the green Martians claim their fully-formed, four-feet-tall offspring. Sola claimed a young male to whom she would teach the barbaric skills necessary to survive the cruel existence of dying Mars. Under Sola's tutelage, both Carter and the child soon learned the spoken language and developed the mental powers needed for the universal Martian language of telepathy. 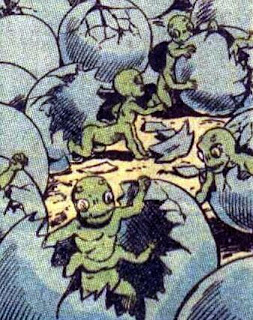