A Princess of Mars Adventure - Chapter 8

Chapter 8  A Fair Captive From the Sky

Now we're getting to the good stuff.

Book Summary
A fleet of Helium airships appear on the horizon. The green martians jump to action to attack the ships. The deadly exchange of gunfire cripples one of the ships and sends the others into retreat. The Tharks board the ship to loot it and they capture a prisoner: a two-legged creature that looks just like an earthling except she has deep red skin and is extraordinarily beautiful. The martians torch the ship and send it away. Captain Carter is startled to find the copper-skinned beauty who is naked and unashamed. She fills with hope upon seeing Carter and makes an enigmatic hand signal he doesn't understand, and when he doesn't respond properly she is disappointing and dejected. The green martians take her away.

This chapter has a lot the characters can do. The characters meet a red martian for the first time and experience one of the most remarkable pieces of technology on Mars; the flying ships. They can help the Tharks, or they can capture a ship, this should be quite difficult, or they can save the red martian who is of course the incomparable Dejah Thoris.

The Helium ship itself could be a whole adventure, or at least several sessions, and will require ship plans. 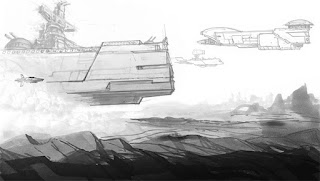