I've been thinking about replacing clerics with military monks.

The basic cleric class has always been a strange fit in the genre of classic swords & sorcery that spawned the settings of D&D. It seems that the cleric was inspired more by Van Helsing as portrayed in Hammer Horror films than by medieval lore or the pulp fantasy novels that filled the imaginations of Gygax and Arneson. The cleric’s Turn Undead ability made them more like protectors of the living from the dead than military monks. In practice they became walking hospitals with a bit of combat ability.

The cleric seems to come almost out of the blue in the first published DnD rules. Chainmail had Religious Orders of Knighthood, it would have made more sense to have a monastic knight character class, which eventually came in a way with the Paladin in the Greyhawk supplement.

Clerics are often the one character class that a group needs to have but nobody wants to play. Paladins are a better fit in the genre than Clerics, but there is obviously an important place for dedicated healers in any adventuring party. They even got an entire booklet dedicated to them with the Gods, Demigods, & Heroes. Despite these efforts they are still some of the least favored classes to play.

To make the Cleric more appealing what if instead of a Van Helsing type, the Cleric was more akin to the military monks of old. Like the Templars, a group that became so powerful the pope and monarchies conspired to wipe them out. Or the high ideal minded Knights Hospitaller who sponsored hospitals, or the legendary and fearsome Teutonic Knights.

Some changes have to be made to adapt them to a world of swords & sorcery where multiple gods vie for servants among the humans, elves, dwarves, and other races. The largest change is making them serve a deity among a pantheon of deities, rather than the monotheism of the real world. Here is an OSR treatment of monastic knights and military monks making them suitable as player character classes, and a worthy replacement of the common Cleric. There are dozens of Religious Orders of Knighthood, the focus here is on the three most well known and distinctive orders. In game terms these represent a spectrum from compassionate healers to formidable warriors.

Templar Order strikes a balance between being warriors and healers. They use d8 for hit dice. Advance like clerics, but only go up to 4th level in spell casting ability. They can turn undead but not as well as Knights Hospitaller.

Knights Hospitaller are compassionate healers and only fight as necessary. They use d6 for hit dice. Advance like clerics in combat and spell ability. They can turn undead.

Teutonic Knights are formidable warriors. They use d10 for hit dice. Advance like fighting men. They cannot turn undead and get no more than 3 spell levels. 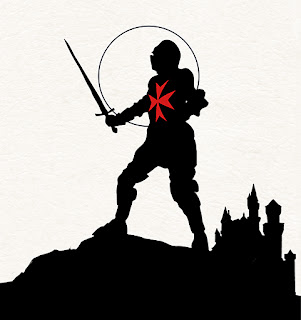