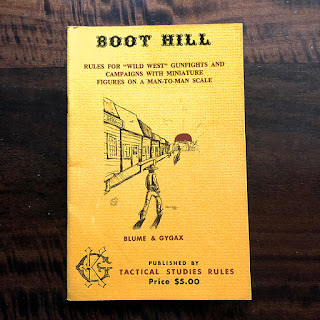 Boothill came out in 1975, just one year after the original D&D.

A few things stand out about this 34 page booklet. The first is how much of an improvement the production values and layout are compared to previous TSR books. The margins give more room for the text to breath, the spacing between paragraphs is consistent, the headers use an appropriate flavored font, the tables are well aligned, the index is well presented. It is far better organized. All of these things add up to a much more legible and comprehensible rules book.

Boothill is not an RPG, it is clearly a war game but sits in the space between the two with a focus on one-on-one gunfights. It is so close to being an RPG, it has simple character creation and advancement rules, if it just had a few more options and more robust experience rules it could be played as one. It describes a combat system, NPC stats, creating an old West town, and has two scenarios; the infamous Gunfight at the OK Corral, and the Battle of Coffeyville. Several characters are given brief write-ups that look like this:

The game is percentile based. Character stats went from 1 Feeble to 00 Mighty. Speed is how fast the character can draw,  Accuracy is a bonus to hit as is Bravery, Strength is more or less Hit Points, and Experience is gained after each Gunfight which improves the character's To Hit over time.

Weapons are described with Range (short, medium, long), Rate (of fire), Weapon Speed, Ammunition, and Reload time. Rather than specific weapons such as Colt 45 or Winchester rifle the weapons are categorized more generically like (SAR) Single Action Revolver or (LBR) Long Barrel Rifle. This is a good approach as there were hundreds of different models of weapons produced during that time and trying to list them all is nearly impossible. And there are real gun aficionados who will nitpick the differences, regardless how subtle, between different makes and models.

The turn sequence, like in Chainmail, is described as either Simultaneous Movement, or Sequential Movement. Sequential goes like this:

SEQUENTIAL MOVEMENT
A. Movement: Each player moves (or opts not to move) in turn, as outlined in the movement rule section.
B. Combat: Each player. after his move, has the option to initiate combat immediately after his move. All players wishing to fire do so at this time, and no one may fire again until all players have had the opportunity to move.


C. Brawls: After each round of combat (or after all players have moved, if no combat has occurred in the turn) use the BRAWLING section to resolve all hand-to-hand fights. Each participant shall have two rounds of brawling per turn.

This describes turn order and combat far better than D&D books did at the time.


First Shot:
To determine who gets the first shot add and subtract the bonuses and penalties shown on the FIRST SHOT CHART. Do this for each figure firing that turn. The one with the highest positive total fires first, with other figures firing in order thereafter. Note that subsequent firing must be adjusted for any wounds scored upon the firing figure by figures firing previously. In case of ties fire is considered as taking place simultaneously with regard to the figures whose total scores were tied.

The chart it refers to lists bonuses and penalties based on each character's Speed score, the speed of their Weapon, Surprise factor, Movement such as riding a horse, and Wounds the character may have. It is a solid variety of factors without being exhaustive. There is enough information in the chart that the referee could make calls on other factors not listed. 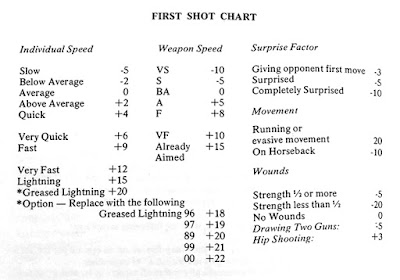 To Hit is simple: you have a base 50% chance to hit. Roll percentile add & subtract all the modifiers, if the total is 50% or better you hit. Then roll Hit Location which could more accurately be called damage which is subtracted from the character's Strength score. Damage is either 3, 7, or Dead. Fast and brutal as a gunfight should be.

Wounds affect a character's To Hit modifiers and their Movement Rate.

There is an advanced hit location chart that still do the same damage to Strength, it just provides more specifics as to what part of the body is wounded.

D&D is notoriously known for not handling unarmed combat well, too bad it didn't use the excellent system from Boothill! Under Brawls is described punches and grappling. Followed by a chart that describes bonuses and penalties for different moves like jabbing, kicking, bear hugs, and so on. It integrates seamlessly into the combat system.

There is an Advanced Combat system that covers shooting while moving. Arching arrows over cover like a wall, and a Morale system. It isn't really much more complicated, I'd probably use it were I to run a game of original Boot Hill. There are also optional rules that complicate the First Shot system and adds a Greased Lightning rule, Sharpshooting which is almost a skill, and some other miscellaneous rules like dynamite, aging, and more.

This is not a game that was common in the groups I gamed with. It wasn't until much later I picked up a copy and played it a few times at game conventions. But by then Deadlands was far more popular and easier to get into a gaming session with.

Boothill is one of TSR's missed opportunities. Why did TSR keep making wargames when it was clear their RPG line was taking off? All focus should have gone into the money maker when you've got the tiger by the tail. There was a time before GURPS that TSR could have owned the universal roleplaying game genre and Boothill could have been the first entry into that by converting D&D into a western, and then into sci-fi with Metamorphosis Alpha using D&D rules, and on into other genres. I know hindsight is 20/20 but it seems it should have been obvious to expand D&D in this way. They even knew it, because in the introduction to of Men & Magic under Scope Gary Gygax states "Actually, the scope need not be restricted to the medieval; it can stretch from the prehistoric to the imagined future". There it is. Instead they let Traveller gobble up the sci-fi genre, Cthulhu took horror, superheroes was taken up with Champions, and of course GURPS owned the universal genre.

In summary, Boothill is excellent for what it is. A fast, simple wargame-like treatment of the western genre. I'd even suggest that some of the mechanics were innovative for its day. It falls short of being great by its lack of depth in character creation and setting information.