I'm going to dive into the most maligned RPG of all time. A game so infamous that an industry award called the "Diana Jones Award" is given out each year, in honor of just how terrible this game is. It is somewhat ironic that this award represents excellence in gaming as chosen by a select group of game industry insiders, but this is how the committee explains it:

The Diana Jones committee believes that a trophy that embodies the destruction of the last copy of one of the games industry’s most unloved and least-mourned products is a suitable symbol for the aims of the Diana Jones Award.

Unloved. Least-mourned. This is how the Indiana Jones RPG is remembered. 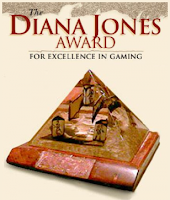 Based on Raiders of the Lost Ark which isn't just a good movie, it is one of the greatest films of all time. #36 on IMDB's top films list. #60 on AFI's top list. It holds a special place in the hearts and minds of fans everywhere. Perhaps the greatest sign of how beloved this movie is: attend any convention where cosplayers roam and you will inevitably see several Indiana Joneses & Diana Joneses. But, not only was Raiders of the Lost Ark a fantastic movie, it had two terrific sequels that expanded the world and were also both well received (well, a minority did complain about Temple of Doom's sillier tone, but I happen to like it a lot).

These movies have action, adventure, mystery, great characters, and magic. All the ingredients for a fantastic game.

What went so horribly wrong? What made it so bad that it deserved to be called the worst RPG of all time? Well, apparently it is because of one fatal flaw: no character creation rules.

For this grievous sin, for this unpardonable oversight, for this unspeakable crime against gaming, IJRPG was banished to the nether realms, to the graveyard of failed RPG's.

The Adventures of Indiana Jones is a remarkably high quality product for its day. It included a rulebook, an adventure, a battle map (a world map on reverse), a referee's screen, 3d cardboard fold-ups, dice and a crayon! That is a lot of value packed into the box. 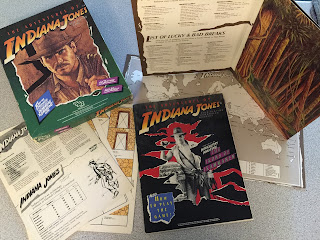 The next installment of this review I'm going to do an overview of the system itself.

On a side note as I was writing this review, the news dropped that John Williams will be scoring the next Indiana Jones film which will star Harrison Ford.

I've often thought that Indy works best in that period between World Wars. He is at his best when his adversaries are Nazis. Harrison Ford is great and incomparable, but so was Sean Connery as James Bond. Time for a new actor to put on the fedora and start a new story at the tail end of WWI. Imagine him meeting Private Hitler in the Great War, the beginnings of an epic rivalry...﻿

At any rate, as I wrap this up, here are some other reviews and semi-reviews:

Not a lot of reviews on the interwebs, but this one by Doc Rotwang echoes my opinion pretty well:
http://xbowvsbuddha.blogspot.com/2012/05/youd-better-watch-your-mouth.html

Grognardia simply says "How disappointed I was when I finally got hold of a copy of the thing!"
http://grognardia.blogspot.com/2011/08/ads-of-dragon-indiana-jones-roleplaying.html