I loved all the quirky character classes created in the heyday of Dragon magazine. I have some particular favorites, some of which I hope to convert to S&W eventually.

The sentinel was one that I really liked, not because the idea was so great. I mean, he's just a glorified fighter, but the word sentinel is so evocative, it brings up images of a lonely guard standing watch on a tower wall. Vigilant, because he knows the enemy may strike the moment he lets his guard down, and he has the fate of those under his watch at stake.

This is my first attempt at a homebrew character class, I apologize for any faults, and I may be doing some unusual things that are growing out of my own campaign that I'm preparing to run for our gaming group. One of these is the way I'm handling "pseudo-skills" with a simple bonus to a d20 roll. Yeah, I know this reeks of the d20 system, but it is the simplest way to manage these kinds of things I know of. And instead of a combat matrix, just a simple bonus to d20 roll vs armor class is presented as "Attack Bonus". (I will always use the "ascending" AC system).

This is a work in progress, anyway without further ado, I present the sentinel:

Sentinel
You are a keen observer and stalwart watchman. Whether stationed on the city walls, or on the dangerous fringes of the borderlands, you are loyal to your country and liege, sworn to protect and defend that which has been entrusted to you. Your diligence to stay alert and your sharp eye make you the one to rely on to stay on guard through the night and to notice the slightest details that most overlook. You may not be able to cleave through hordes of enemies like the fighter, or understand the mysteries of faith and magic like the cleric or mage but the party relies on you to defend the weaker members. You insure the spell-casters can concentrate on their spells, and you hold the line in a tough battle. Eventually you may be granted a fort on the borderlands, or a castle in the heart of an important region to defend and protect the peasants and merchants and ensure the preservation of the civilized lands. 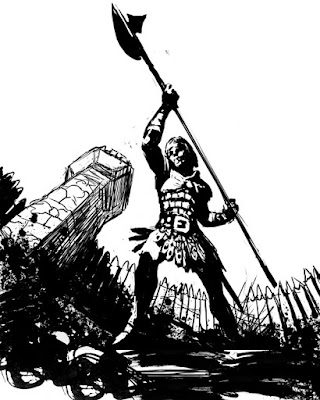 Sentinel Class Abilities
Alertness: at 1st, 4th, and 7th levels the sentinel gains +1 to all initiatives rolls. At 11th level he is incapable of being surprised.

Detect lie: the sentinel can often tell when he is being lied to.

Establish Stronghold (9th): At ninth level, a sentinel is granted a stronghold and attracts a body of loyal men-at-arms who will swear fealty to him. If he maintains the stronghold well, at 14th level he may gain the title of feudal Lord. If the stronghold is reinforced and built into a castle it will attract villagers, and the sentinel may become a baron at 20th level. 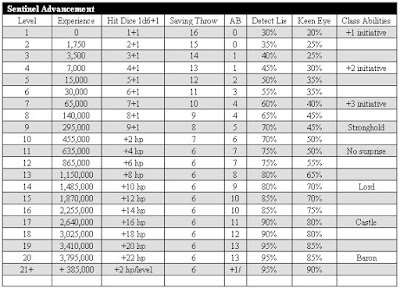 Notes on format and abbreviations I'm using:
AB: this is attack bonus, a number added to a d20 roll vs. armor class