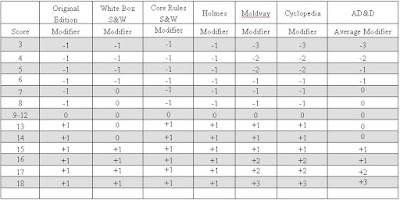 AD&D modifiers are all over the place, so I just averaged them.
Moldvay-Cyclopedia: all editions of "basic" D&D after the Holmes edition have the same modifiers (including Red box, Elmore cover red box, Cyclopedia, and Classic)

Personally I really like the spread in the Moldvay edition, and the Rules Cyclopedia has long been one of my favorite RPG books. I've found myself rereading the Cyclopedia after Swords & Wizardry sucked me back into "old school" gaming. I didn't recall it rambling so much - kind of like the 1st edition DMG except without all the personality of Gygaxian prose. And as it has often been commented, the layout and art are not exactly inspiring. Still, it has a magic quality to it. Probably because it is the only official D&D book ever published that can truly be called "complete".

So what was the point of this excercise? I'm not sure I'm sold on the ability adjustments as presented in S&W, they're just a bit too conservative, and I'm thinking of just using the Moldvay edition in that respect.

Another reason, when I first got the Deities and Demigods book in high school it was mind-blowingly cool that it expanded the ability stats table up to 25. Yeah, we just looked at that book as the "really high level monster book". Of course this kind of "monty haul" gaming is frowned upon these days, but I don't care what anyone thinks, we were having fun! Isn't that really the point?

I was curious how the Moldvay/Cyclopedia ability spread would look expanded in the way the original Deities and Demigods did. Also, Gods, Demi-Gods, and Heroes has a tradition going back to original edition. I'm looking through my copy right now. It's funny how the introduction claims it is the "last D&D supplement"...

I haven't seen a table like this done for basic D&D, and thought it'd be fun. I took a few liberties, and ironed a couple of spots, but this is basically it: 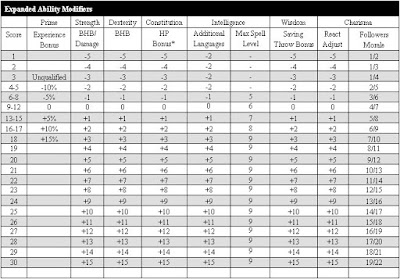