Some of the small things that contained stunning bits of wonder and stirrings of the imagination have been lost in later editions of D&D. For example in the classic Red Box set, or "Moldvay edition" as it is often referred to, there was a little cross section that described the levels going down in a dungeon. 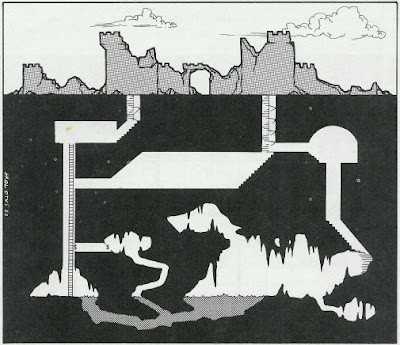 I don't know if the authors were aware of just how powerful this image was. Certainly, later editors didn't because nothing quite like it has been seen in recent editions. To a kid this map showed the depths dungeons could go to and promised unlimited adventures. I especially like the contrast of the dungeon sections and the cave like grottos below. I could easily imagine dark things stirring in the murky waters, things best left alone, but that might hold great treasures.

I bring this image up because I'm getting ready to add depth to the isometric we did yesterday, and this cross section immediately sprung to mind. It wouldn't even take too much imagination to see how this could be married with the sample dungeon.