I've come to appreciate simplicity, or more importantly, elegance in game design. Einstein would say "Make everything as simple as possible, but not simpler."

In middle school there was nothing cooler than consulting tables to see "to hit" numbers. However, getting past my nostalgia I have to admit that the simple "BAB" (base attack bonus) of 3.0 DnD really was an improvement. So I appreciated the "ascending armor class" system in S&W. It was, I think, another good design decision - where the goal to stay true to the original edition didn't stand in the way of something clearly simpler and better. Matthew Finch wasn't afraid to acknowledge that.

I wanted to take the ascending armor class to hit chart and look at it in a different way. First of all I like charts in "portrait" orientation. And also it is interesting to see the comparison of classes by how they cap out on their attack bonus. (yeah, I'm calling Base "to-hit" Bonus simply Attack Bonus) 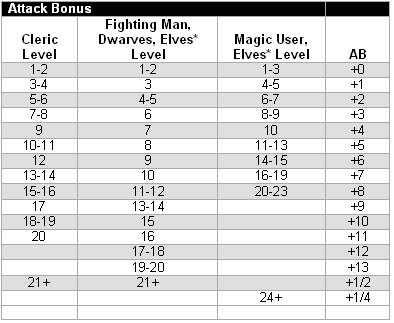 Okay, so I've invented a bit on the 21+ levels, because the charts don't really go there. I gave what I think is a reasonable interpretation. Since the advancement tables allow for going beyond 21st level.