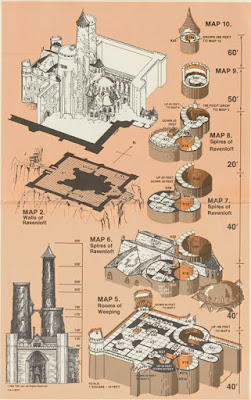 In 1983 TSR released the Ravenloft module, a product that continues to inspire me. The adventure was revolutionary in its day in that the structure allowed for the module to be played multiple times and the basic story elements could be different each time thanks to a unique fortune telling mechanic. Basically early in the adventure the DM played a forune teller and took a regular pack of cards, shuffled them, and drew cards that when compared to some charts selected the plot elements. The module itself had some fun encounters, an interesting "boss"monster Strahd von Zarovich the vampire, and it evoked a very spooky goth mood (which in that day wasn't the over-exposed genre it is now).

To a young budding artist like me the truly compelling things were it had a great cover, great interior illustrations, and most mind-blowing: "3d" maps. Dave Sutherland really outdid himself in creating an amazing isometric construction of the main encounter area: Strahd's castle. Next to his classic "Paladin in Hell" illustration, I consider these maps his finest work.

I would sit for hours reading the module, looking at the maps, and imagining what it would be like to wander those haunted halls. I only ever played the adventure once, much later, and while it was fun - it didn't quite live up to my vivid imaginings.

Years later I went on to attend art school, and had some training in perspective, and learned just how easy isometric is to draw in. Especially with modern digital tools, and a little bit of understanding of isometric, it is easier than ever. I thought it would be fun to put our monastery cellars and dungeon into isometric as part of our fleshing out exercise. I'm using photoshop for this, because the transform tool is so user friendly. Though for a clean map I would normally us Illustrator since it creates perfect, hard edged lines with vectors.

What is isometric? Well, true isometric is based on a grid from a perfectly vertical line, with two other intersecting lines that create exactly 120 degrees radius between each line. Like this: 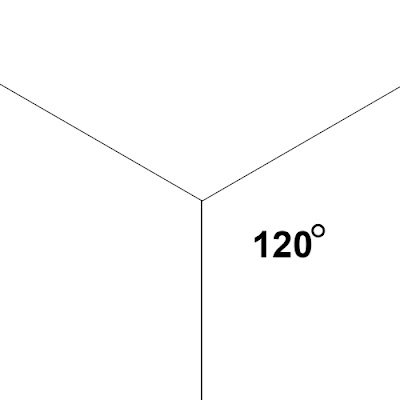 One of the nice things about drawing in isometric is that there are no vanishing points. All parallel lines remain parallel forever. They never touch. So there is no distortion in your drawing from things getting smaller. Scale remains static no matter how far or near an object is. What this means is we can take the 2d map and rotate it so that the edge lines up with one of our 120 degree lines like this: 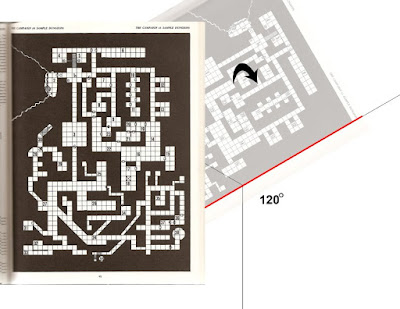 Using the transform tool rotate the map to the right until an edge lines up with your 120 degree grid line.

The next thing to do is to "skew" the other edges of the map so that they line up perfectly with the other 120 degree line, like this: 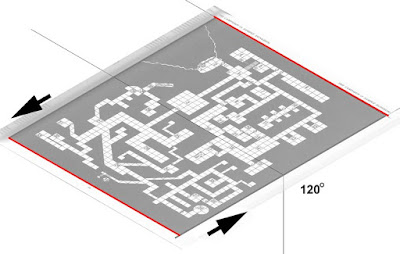 Using the transform tool hold Control down, click and hold on one of the top control points then skew the map to the left, until the top and bottom sides align to your 120 degree grid line.

And simple as that your 2d map is now in isometric perspective! We can play with raising and lowering various levels of the map up and down, such as stairs going up, or passage sloping down later, because it is relatively easy to do now that the map is in iso.: 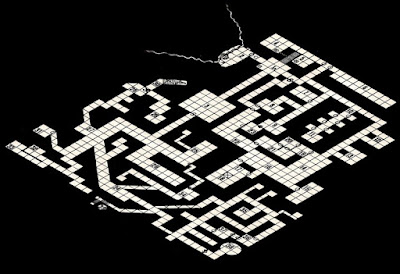 And of course, to really capture that "old school" feeling that stirs up the warm fuzzies of nostalgia, there is nothing better than altering the color to the classic non-photo blue used in the early modules: 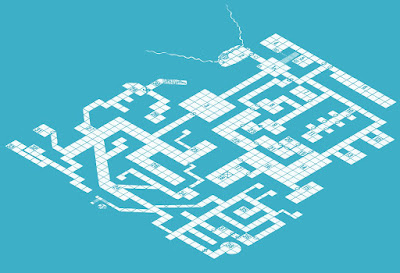 I recently learned that the reason the early maps where done in non-photo blue is because Lorraine Williams, CEO of TSR, believed that the maps where the most valuable thing in the modules and didn't want the fans photocopying them and somehow depriving her of a few bucks.

Fine by me. I think this particular color is quite aesthetically pleasing, and certainly makes those classic maps distinctive.