Beyond Fire and Forget 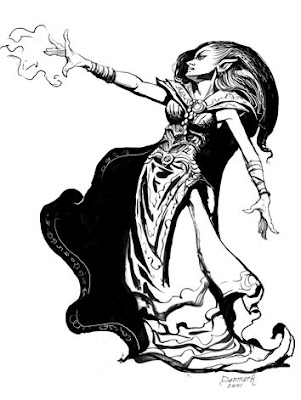 "Vancian" spellcasting isn't particularly my favorite. I've never read any of the Dying Earth books, so I'm probably missing out on something really great. I intend to someday, but I've already got quite a pile on my reading list.

I was wondering if there was some way to use the exact system as written in S&W, but apply a different fiction behind the magic. What if, instead of memorizing spells, Wizards where actually more like alchemists who put together potions and oils, and the activated chemical reactions created the spell-like effect. In game terms the spell would be identical as written, but the story and flavor behind it would be a little different. This could open up opportunities for different kinds of adventures and for molding my own campaign into something unique.

In the case of some of these I've actually fiddled a bit with the system (particularly spell points, or manna as I'm calling it), but most of these use the system as is with just a different reason behind them. Starting with the classic spellbook, and moving on from there.

The classic “Vancian” system in the original edition may not be the best fit for the fiction of your fantasy world. These are alternative fictions, though the mechanics are effectively the same. Some, or all of them, could be present in your world.

Spellbook
This is the default system. The spellcaster has a spellbook that describes how to cast a spell. The instructions must be carefully memorized, a process that takes some time. Then the instructions must be followed exactly with intense concentration in order to properly cast the spell. If the caster’s concentration is broken in the slightest, the spell fails. When the spell is cast, or fails, the instructions are forgotten by the caster and must be rememorized. The GM determines the specific requirements of the spellbook. A good rule of thumb is 1 page per spell level of each spell recorded in it. New spells can be recorded in the spellbook, a process which takes a good deal of time as determined by the GM. This could be a day or even a week per level of the spell, depending on complexity.

Runic
This is a system where mystical characters are written on a special surface, such as a stone, a piece of ivory, or an expensive vellum scroll. Reading these characters out loud releases the spell held within the runes and in the process destroys the material the runes are written on. Transcribing runes is a difficult and time consuming process that taxes the person binding the spell within the runes. The spellcaster must understand the language the rune is written in, be this an ancient long dead language, or a mystical language known only to learned wizards. During a wizard’s research time each day, he may transcribe a number of runes equal to the total of his spell slots listed in his class’s advancement table. The GM will have to rule if the power in the rune lasts for longer than a day, if so it is possible for the wizard to store up runes – and have the potential to cast more spells in a day, which could adversely affect the power balance of the wizard.

Manna
These are spell points. The spellcaster can cast any spell he knows as long as he has the spell points available. The caster gets an amount of manna equal to the total of his spell level slots listed in his class’s advancement table. Each level of a spell requires 1 manna to cast (a 3rd level spell would cost 3 manna). A caster cannot cast more spells of a particular level than listed in his spell slots. In this system there are no spellbooks required, though a spell may still need verbal, somatic, or material components to cast as described in the spell.

Mental/Psychic
The caster uses his mental energy, or his own life force to cast spells. This is drawn from deep within his cerebral cortex or his soul. Powering a spell physically drains him. With each spell the caster makes a saving throw, if he fails he takes 1 point of fatigue. When fatigue equals or exceeds the caster’s constitution he falls unconscious. The caster recovers at the rate of 1 point per hour of rest. (this could also be a fiction for psionics, but one that fits nicely in a fantasy world, and doesn't require a complicated new system)

Alchemical
The caster creates the effects of a spell using chemicals and other material components. The caster would be limited by the amount of potions, oils, and salves he could carry. Many adventures could involving tracking down these rare components. Slaying monsters could reap rare and precious materials for alchemical concoctions.

Channeling
(for clerics, or possessed wizards) The caster gets his magic from another power, terrestrial, infernal or celestial, and he becomes the channel, or conduit for the immense power of the spell.