On my doorstep when I got home from work... 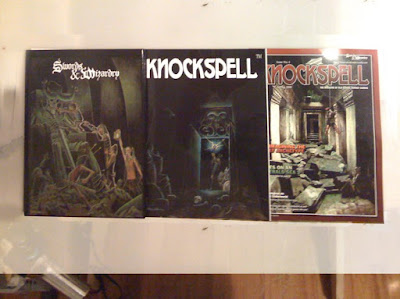 If you've only been looking at the PDF's, the print editions are oh-so-much-more glorious! The font size, the clean layout, the weight of the books in your hand, it all adds up to a much more satisfying experience. And much easier to read.

I've already made quite a bit of progress rereading through the Swords & Wizardry core book, and I'm having some epiphanies about what the grognard's mean by "old-school" gaming. There is something about the looseness and free form nature of the less-than-detailed rules that allow for spontaneity. My mind fills with so much more potential and ideas than a lot of the more "complete" RPG's I've read lately. Looser rules are indeed a big part of the magic that has been lost!

It is making me rethink my approach to the sentinel character class. I want to remove the percentage stats for keen eye and detect lie, and allow for the GM to have more freedom in interpreting these things. Because the GM is going to know his players and campaign so much more than this designer could ever anticipate.

The release of Swords & Wizardry is good timing for me. Between the releases of DnD 3.0 and 4.0 I, like many, became enamored with the "indy RPG" movement. RPG's with such diverse genres as playing Mormons on the frontier to playing a Cat (though one of my favorites was Secret Lives of Gingerbread Men). Despite the quirkiness that some of them engaged in, there was a lot of compelling work being done. And best of all, the indy RPG's tended to be rules-lite. It was almost like I was being primed for the release of Swords and Wizardry.

I feel like our beloved game and hobby is being reclaimed by the fans.