I love orcs! Just as much as anyone. I mean, I illustrated a whole book on orcs (or, orks, as they were called in that case). I also think hobbits are the bees knees. It was seeing Rankin-Bass' "The Hobbit" at the tender age of 8 that propelled me into being a fan of (nearly) all things fantasy.

But I want to remove all Tolkienisms from my campaign. Why? Because Tolkein did them so well, and they fit so beautifully in the world of middle-Earth that I just don't like how they've been plucked from that world and thrown into generic fantasy.

I want to base my campaign on Mythic Earth. That is to say, real world mythologies, legends, and history. Which I've felt for a long time should have always been the default world setting of D&D. I say this with no intention to malign it's pulp fantasy influences, because I love all things Burroughs, Howard, and Leiber! I would just prefer them to be in their own supplements. They are each like a masterpiece composition, and isolating the parts only mars the works of art they are.

Another reason is that I had a Greek mythology book as a kid, and there were two paintings in it that inspired my desire to become an artist.

The first was Lament for Icarus by Herbert Draper: 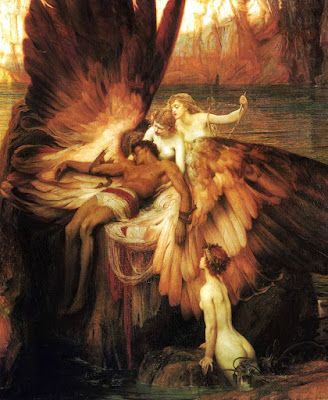 And the other was Hylus and the Water Nymphs by JW Waterhouse: 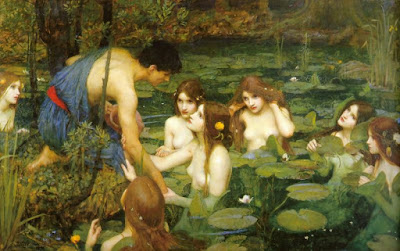 Beyond the obvious reasons a boy might like these I was always captivated by the stunning beauty and craftsmanship of the art. I just didn't understand how you could put oil paint on a canvas and make it look like this (alas, sadly, I still don't).

When I say Mythic Earth, this is what I'm talking about.

The part of me that admires not just quality, but the highest quality, can only imagine D&D art ever looking like this. There are some great artists working in the field today, but only a few might even approach this level, and their services are likely cost prohibitive. Besides, few publishers are interested in this genre labeled "romantic fantasy" and consider it to be "quaint". Today it's all spiky armor and grimacing faces that look like the characters are suffering a severe bout of constipation.

So, I'm saying I want to de-Tolkienize my campaign. That means no orcs, no hobbits, and the dwarves and elves, I mean dwarfs and elfs need a serious revision.