I've been playing the 5th edition with my kids and for the most part we're all enjoying it, but it really feels unnecessarily complicated in many ways. In particular character creation is excruciating. The idea is that most of the calculations and work is upfront so that during play things go much more smoothly.

We found the basic character sheet to be way too busy and hard to read. I made a version that removes much of the clutter and improves legibility. It doesn't have every single thing from 5th edition, but it does have everything you generally need while playing. Making this sheet a much more kid-friendly version. Here is a relatively high rez version you can download and print out for your own games: 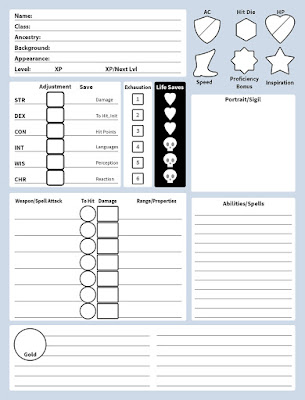 Edit: yes, skills are missing. I'm an advocate for players solving problems through clever game play rather than relying on a die roll and a solution on their character sheet. There is room for indicating important skills in the abilities section. It says Ancestry instead of Race because we've been exploring genres other than fantasy. It says Life Saves rather than Death Saves because not only is it a more kid friendly term but it is more accurate as to what the game mechanic does; it saves your character's Life.