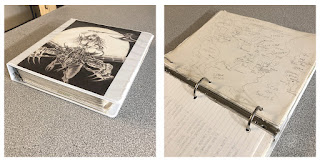 Tarniss is the background world setting for the Dungeoneer card game. It appears in the flavor text, character names, and monster you encounter while playing. Tarniss was based on my middle school D&D campaign world that I developed all throughout high school, and into my early 20's as well. It went by many names, originally called Talindor. Fortunately I kept many of the notes, drawings, and maps in a binder. One of the few things I still have from back then.

This is the very earliest map drawing I have in my binder. 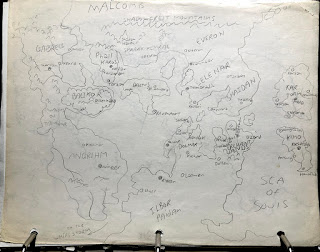 It has been a long time since I looked at this. It's surprising how many of the original names and much of the original contour survived through multiple revisions and development of the world. In the late 80's I got my first IBM computer, I don't know when I first drew a digital version of this map but I found this printout. 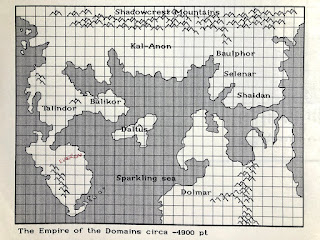 You can see it's called The Empire of the Domains. A title that represented this was just one of many domains in the solar system. It was a little influenced by Spelljammer there were multiple planets, or domains, you could visit. Some had pretty wild geography and the planets were crazy shapes that look a bit like polyhedral dice. Maybe I'll post some drawings of that when they get scanned in.

As a fantasy world made by a middle-schooler it doesn't exactly have an amazing high concept. Eldritch Lords long ago stole the secret of magic from the elves, turned against them, tore the world apart with their dark arts until they were overthrown by the free peoples. At one point a demon lord created a portal into Tarniss and spread a plague of demons who were beaten back through the portal which was sealed with an eternal lightning storm. It's essentially a gonzo medley of a fantasy world with everything thrown in. But we sure had a lot of fun exploring it.