The Adventures of Captain Carter and the Princess of Mars

A Princess of Mars is a perfectly good and catchy title. But, if we're going to play this game let's find a title that can have some legs to it. Something you can really turn into a franchise. Because clearly John Carter is a terrible title.

If I'd been head of marketing my proposal would have been The Adventures of Captain Carter and the Princess of Mars. Hey, it works for Indiana Jones.

Speaking of A Princess of Mars, let's convert the novel into an OSR adventure! 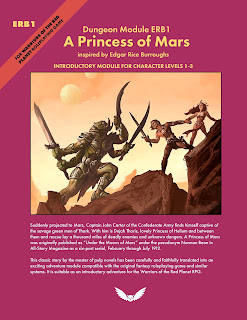 This is the start of a design diary for converting A Princess of Mars into a Warriors of the Red Planet adventure.

I started this project years ago as a sort of high level concept back in October of 2017. Since then it has been on the back burner slowly simmering, as many of my projects do. This is a period of research and development where reference and ideas are collected. Then development really heats up when it becomes my current project.

You might notice a little sidebar of projects here in development, and this Princess of Mars adventure is the next up.

The first step was writing a detailed outline of the book. Figuring out all the locations so rough maps can be drawn and areas fleshed out. The biggest question was whether or not Captain Carter is going to be in the adventure. This is a huge decision I may leave up to the GM. The worst thing would be for John Carter to drive the adventure and the players to just tag along. They need to have the starring role. So my solution is to create a timeline of events and situations, then leave it up to the players what to do as these things happen.

There is a bookend device in the book with Captain Carter's 'death' and his tomb, and his adventures gold mining in Arizona and encountering hostile native Americans. This will be in the adventure, just not required. The players may just start on Barsoom as natives, or possibly Jasoomians somehow on Barsoom. I think these details will need to be up to the GM and players, but the information will be provided.

I've been working on this adventure for Warriors of the Red Planet for some time, but now it has moved to the forefront of my OSR projects and design work is heating up.

Would anyone be interested in me posting a regular design diary here?

Here is how I've broken the adventure down:

1. Introduction and Background
2. Adapting this novel to an adventure
3. Chapter by Chapter of the novel with summaries of each
4. Roster of all the major characters
5. Maps of all the locations
6. Appendices
7. Bibliography
8. OGL

The first challenge was making it for a party of adventurers instead of one man. And whether or not John Carter is a character in the adventure, and if he is how to not have him overshadow the party actions.

So this is the kick off. Your thoughts are welcome.