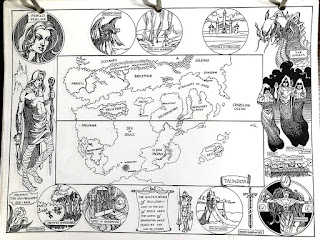 At some point in the 90's I drew an inked version of Tarniss, the fantasy setting for the Dungeoneer card game, which was at the time being called Talindor. The map drawing has a heavily illustrated border with important characters and scenes from the world. It wasn't completed because I didn't like how the illos were dominating the map. Looking back at it now it isn't as terrible as I thought.

The illustrations are, clockwise from top left:
Princess Perilina: she was a princess with super-powers, inspired a bit by the nameless protagonist in Tanith Lee's novel The Birthgrave.
Draken Lairs: the Shadowhaven mountains are infested with Drakens, basically small dragons.
Fire Pits of Shadar: no specific memories of anything specific about this other than lava pools being a great adventure locale.
Temple of Cholizar: this eventually became the Realm of the Ice Witch expansion for Dungeoneer.
The Kargak: basically like the tarrasque from the first edition Monster Manual 2
Hope, Revelation, Despair: kind of like the Norns from Norse Mythology
Kez the Unwaking: a great hero in stasis who could be reawakened when his sword is put back together.
Dimension: the goddess of 3 dimensional space and time
Broken Sword of Kez: yeah, Kez's sword was broken in 3 parts.
Palanthion: the capital of Dolmaranthus.
Gwildor: a great paladin who battled the demons back to hell, he was obliterated when the gate to hell was sealed. His holy armor spread into the Sea of Souls. He is later named Gvandir in the lore.
Gates of Bandimar: a seal on a portal to hell that is manifested as a great thunder, lightning, and fire storm that whirls over the island of Bandimar.
Haunted Mistenwoods: this became The Haunted Woods of Malthorin expansion for Dungeoneer.
Lilus Arcana: a magic plant
Arcanuz the God-King: the big bad guy of the world. Part lich part insane eldritch lord. He was the servant of the 13 demon lords that once ruled ancient Talindor (Tarniss).

This map is a photo copy in my old high school D&D campaign binder, I don't know if the original drawing still exists or if it's stored in the garage somewhere.