Continuing to turn A Princess of Mars into an OSR adventure. Ideas for The Cave.

I spent part of my childhood in Marana AZ, which is not terribly far from Fort Grant, so I am familiar with what the terrain is like. The Arizona desert is incredible and it is hard to explain how beautiful and wonderful it is, you have to experience it. I'd ride my horse along the washes, which were places that would flood during Monsoon season, and explore the cactus and brush filled canyons and hills. Arizona holds a sort of magical nostalgic feeling for me. I can understand why it had such an impact on ERB though he only spent a short time there.

By May 13, 1896, when ERB arrived at Ft. Grant the Apache uprisings had largely been quelled. There were still some fighting the settlers, like the Apache Kid, as well as plenty of outlaws, and notorious Cowboys, a name which had a very different connotation back then. In doing research I've been looking into the Apache side of the conflict and it is tragic as they fought the Spanish explorers, and then the Mexicans, and finally the US Cavalry to remain free and in control of their homelands.

The Apaches considered Mount Graham to be sacred. And when you read conspiracy theories about the Vatican Advanced Technology Telescope the reason they built it there was because of the mystical energy in the place. Here is a narrative thread combining these ideas.

Thurns trying to get a foothold on Jasoom built a teleporter under Mount Graham long ago. The strange activity appeared supernatural to the Apaches thus it became sacred. The Cave was on old gold mine that the Thurns excavated and built their teleporter in. They make it seem haunted in order to scare people away - thus the strange sounds it occasionally emits. Perhaps the mountain holds some nexus of natural energy or magnetic waves.

- A Princess of Mars Chapter 1: Leaving Powell’s body where it lay on the ledge I crept into the cave to reconnoiter. I found a large chamber, possibly a hundred feet in diameter and thirty or forty feet in height; a smooth and well-worn floor, and many other evidences that the cave had, at some remote period, been inhabited. The back of the cave was so lost in dense shadow that I could not distinguish whether there were openings into other apartments or not.


- A Princess of Mars Chapter 28: As my hands passed over my body they came in contact with pockets and in one of these a small parcel of matches wrapped in oiled paper. One of these matches I struck, and its dim flame lighted up what appeared to be a huge cave, toward the back of which I discovered a strange, still figure huddled over a tiny bench. As I approached it I saw that it was the dead and mummified remains of a little old woman with long black hair, and the thing it leaned over was a small charcoal burner upon which rested a round copper vessel containing a small quantity of greenish powder.
Behind her, depending from the roof upon rawhide thongs, and stretching entirely across the cave, was a row of human skeletons. From the thong which held them stretched another to the dead hand of the little old woman; as I touched the cord the skeletons swung to the motion with a noise as of the rustling of dry leaves.


The cave itself has become a hive. Thurns pretend to be priests in local missionaries, infiltrate towns by running Trading Posts. Some are snake-oil salesmen. There is a lot of potential with their nefarious intentions and the players can slowly become aware of this, or investigate strange activity. All this eventually leads them to The Cave where they have a confrontation with the Thurns, maybe rescue some people they've taken captive for strange experiments, and of course end up getting teleported to Mars.

What if the teleporter is unperfected technology, and the location on Mars where it teleports to is random.

So, I sketched out a map.
1. The dead-end canyon
2. The Cave appears as described in the book. In the back is a secret door.
3. The first room carved with Thurn technology has strange smooth walls and weird machinery.
4-6. various chambers
7. The teleportation machine with a great antennae stretching up to the mountain peak (where the modern day Telescope is now built).
8-9. Gold veins and mining equipment.
10. Prisoners in tubes, their life force is drained to power the teleporter. Freeing them activates the machine, it becomes unstable, all the PC's are teleported to Mars near a Thark incubator just as the eggs are hatching... 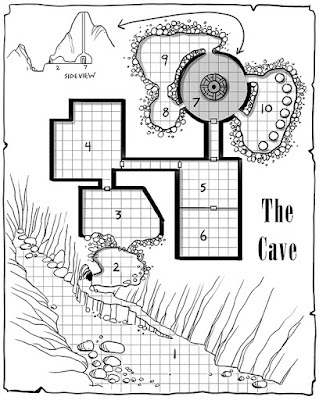