Fort Grant and the Arizona Territory

The novel starts out with a framing device of John Carter's tomb and ERB himself inheriting his property and manuscript of the strange story. I'm not sure how well that fits into an adventure. Maybe it will be worth it to illustrate Carter's home and tomb and tie it into the adventure. But I'd prefer to start with Arizona.

The first map is the Ft. Grant area of the Arizona territory in the late 1800's. Edgar Rice Burroughs was stationed there (really) for 10 months and had some adventures like hunting the notorious Apache Kid. Billy the Kid was also active in the era a couple decades earlier, so it gives some historical context. This was the time of cattle rustlers, outlaws, Apache raids, and prospectors still mining for gold.

To adapt the novel it seemed a good idea to start the adventure out as a western, like the book does. This could be a good intro for players who know nothing of the ERB Mars books as it can seem like a traditional old west game that escalates into a weird martian adventure.

Players create characters as gunfighters, gamblers, scouts, pony soldiers, etc. All basic Fighting Men. It wouldn't be too hard to lure them to the cave. Stories of gold. Chasing a bounty. Investigating the weird-acting priest of the local missionary, who is actually a Thurn in disguise, who keeps visiting the cave.

I have more thoughts on the cave for the next post.

An interesting detail is that the Vatican Advanced Technology Telescope is near that area. This could make for some interesting tie ins with strange technology and the Vatican's awareness of it. Maybe that interests me because I've read some fascinating conspiratorial theories about the telescope there, it also happens to be on a place considered sacred by the natives. 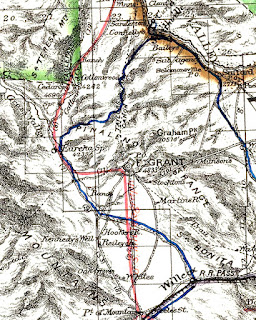