A Princess of Mars Adventure - Chapter 3 Advent on Mars

A Princess of Mars Adventure
Chapter 3 Advent on Mars

Ok, our characters have gotten to Mars. Somehow, someway. Whether they were Lawmen chasing an outlaw into a cave, or Apache warriors hiding out in the sacred mountains and being lured by strange lights. Or maybe you don't want to start with a western, perhaps this is an excursion to shake up your fantasy adventure. Your elf magic-user and human paladin stumbled onto a cave or found a strange artifact and ended up on Mars. Some fantasy in your sci-fi. A little like peanut butter in your chocolate. However you've gotten your players there what happens next?

The characters arrive butt-naked. This is an old trope. Anyone who has played [b]A4 In the Dungeons of the Slave Lords[/b] knows what a great challenge it is to take away all of the character's goodies. Apparently this is something Gary Gygax liked doing to his players. At any rate the characters will be at a disadvantage. No gear, the light gravity will make them awkward, they don't understand the language, and they are right by an incubator that is hatching Thark eggs and a dozen green martian warriors mounted on thoats are approaching. They don't take to strangers kindly.

Here we meet Tars Tarkas. He is still very much a thark, just not quite as cold and heartless as the rest of his people. He is intrigued by the characters because they are not like anything he's encountered before. So instead of outright killing them, as the warriors who accompany him are wont to do, he decides to capture them.

The biggest danger will be turning this adventure into a railroad, but the characters end up prisoners of the Tharks and taken back to the ancient city ruins that they have turned into their home.

(see Warriors of the Red Planet for green martian stats) 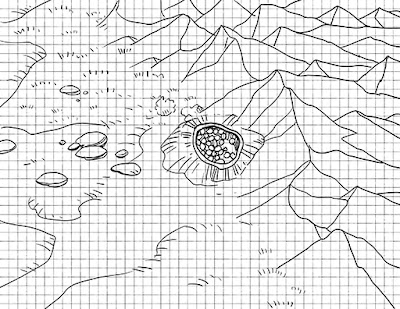