Continuing the adaptation of A Princess of Mars into an OSR adventure. Here is a map I drew of the Fort Grant area. More detail will be added, but this is a start. 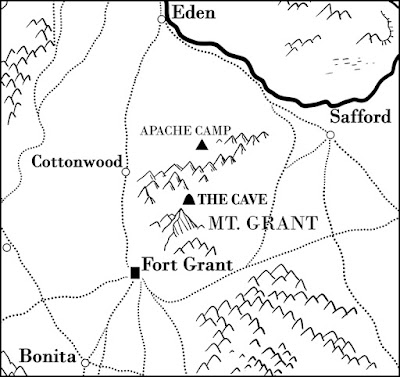 Fort Grant is where the "Bloody" 7th Cavalry was stationed. It was built in 1872 and commanded by Lt. Col George Crook. ERB was stationed there from 1896-1897.
The Cave: this is where Captain Carter flees to from the Apaches, and somehow teleports to Mars.
Safford: the town where Captain Carter goes to get supplies.
Apache Camp: where Carter's friend is captured and taken to.

The opening chapter of A Princess of Mars actually takes place in the White Mountains, which are a bit north of Fort Grant. Of course GM's could have the adventure take place from there instead. I found Fort Grant to be a more fascinating location to start a western in since there is a lot of recorded history such as Billy the Kid who killed a man for coughing or spitting on him in Bonita which started off his criminal career.

Cottonwood will be turned into a hive of scum and villainy for the adventure locale.

I'm working out a western character class like a Gunslinger or a Cavalryman or something to go with the adventure, but this tempts me to make a mini western RPG.